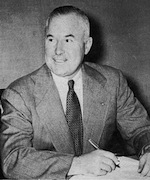 MASON, F[RANCIS]. VAN WYCK (1901-1978). World War I and II veteran, importer, and ultimately writer, F. Van Wyck Mason was born in Boston on 11 November 1901. He was awarded a B.S. from Harvard University in 1924 after serving briefly with the U.S. Army in France during 1918-1919. After leaving Harvard, Mason operated an importing firm in New York for three years before retiring to become a full-time writer in 1928. In all, he penned fifty-eight novels, including mysteries and historical fiction. Mason also wrote a handful of children’s books and, at various times, used the pseudonyms Van Wyck Mason, Geoffrey Coffin, Frank W. Mason, and Ward Weaver. From 1956 to his death in a drowning accident on 29 August 1978, Mason lived in Bermuda with his second wife.

Mason’s career as a writer featured numerous historical romances or novels with a nautical setting. Although a few of his mystery novels were set at sea, his love of the sea inspired most of his historical fiction, beginning with his first romance, Captain Nemesis (1931). Though reviews were lukewarm, Mason hit the best-seller list with Three Harbors (1939), his first in a series of nautical fictional accounts of the American Revolution. Three more novels followed: Stars on the Sea (1940), Rivers of Glory (1942), and Eagle in the Sky (1948). Collectively, these four books took readers from the beginning to the end of the war. Four subsequent novels featured naval warfare, including the posthumously published Armored Giants (1980), an uninspired account of the Monitor and Merrimack. Other books featured fictional accounts of Sir Francis Drake and Henry Morgan. In 1969 Mason published Harpoon in Eden, a story of Nantucket whaling ships during the 1830s.

Mason never reached the popularity of writers such as Kenneth Roberts, yet his prolific output attests to his success. From his remote island home, Mason reaped profits from fictional sea stories with historical settings. by Boyd Childress (2000)