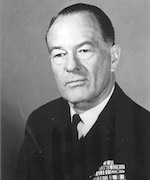 MACK, WILLIAM P[ADEN]. (1915-2003). Novelist William P. Mack was born 6 August 1915, in Hillsboro, Illinois. His first professional writing experience was in 1931 as an interim reporter on the San Francisco Daily News, where his brother-in-law was city editor. He graduated from the U.S. Naval Academy in 1937. When, early in World War II, his destroyer, U.S.S. John D. Ford, returned from the American defeat in the Battle of the Java Sea, Mack wrote the official battle reports. Besides many professional articles, Mack has written three books known to every U.S. naval officer and appearing in a number of editions: Naval Ceremonies, Traditions, and Usage (1980), Command at Sea (1982), and Naval Officer’s Guide (1964).

His distinguished naval career included assignments as speechwriter for the secretary of the navy and for presidents John F. Kennedy, Lyndon Johnson, and Richard Nixon. As commander, Seventh Fleet, during the Vietnam War, his operations against the North Vietnamese included the mining of Haiphong harbor in 1971. After serving as superintendent of the Naval Academy, Mack retired in 1975 as a vice admiral. Mack collaborated with his son, William P. Mack Jr., on a first novel, South to Java (1987), based upon his South Pacific experiences. Writing solo, Mack has produced five more World War II naval novels: Pursuit of the Seawolf (1991), Checkfire! (1992), New Guinea (1993), Straits of Messina (1994), and Normandy (1995). Captain Kilburnie (1998) is a novel of the Nelson era. Mack lives in Annapolis, Maryland. by C. Herbert Gilliland (2000)