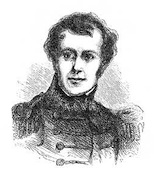 MACKENZIE, ALEXANDER SLIDELL (1803-1848). Career naval officer, author, and naval historian, Alexander Slidell Mackenzie gained notoriety for his part in quelling the “mutiny” aboard the Somers in December 1842. Mackenzie, who legally changed his last name from Slidell, entered the navy as a midshipman at age twelve, served under the legendary Oliver Hazard Perry, and eventually attained the rank of commander. He was captain of the Somers, a brig on her second cruise as a training vessel, when he was told by his first mate that there was an apparent plot by a small group of men to take over the vessel. Although he at first dismissed the story as exaggerated, Mackenzie came to believe the vessel was in danger of mutiny and hanged three of her crew at sea. One of the men executed was eighteen-year-old midshipman Philip Spencer, son of John C. Spencer, President Tyler’s secretary of war. When news of the hangings made its way into the press, Mackenzie was both praised and vilified for his action. A courtmartial trial cleared him of any misconduct.

In addition to serving in the navy, Mackenzie was an author of travel books as well as naval biographies. His works include A Year in Spain (1829), The American in England (1835), Spain Revisited (1836), The Life of Commodore Oliver Hazard Perry (1840), and The Life of John Paul Jones (1841). Mackenzie’s actions in the Somers affair, together with his shrill participation in the debate over the Battle of Lake Erie in the War of 1812, earned him the enmity of fellow author and naval historian James Fenimore Cooper. Mackenzie was respected and liked, however, by other members of the literary establishment, including Washington Irving, Henry Wadsworth Longfellow, and Richard Henry Dana Jr. by Hugh Egan (2000)