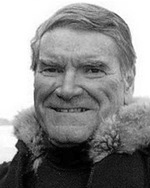 HOUSTON, JAMES [ARCHIBALD] (1921-2005). James Houston has made his mark in writing, art, film illustration, film and documentary production, and design. Winner of numerous awards, Houston has written several children’s books and novels on the Arctic, Arctic seas, and the Inuit people.

Houston was born in Toronto in 1921, the son of a clothing importer. He received extensive art training in Toronto, Paris, and Tokyo. From 1940 to 1945 Houston served in the Canadian armed forces. From 1949 to 1962 he served the Canadian government in various positions in the Northwest Territories, the Arctic region, and Baffin Island. In 1962 Houston joined Steuben Glass in New York as a designer, where for the past dozen years he has held the title of master designer.

Houston has won three Canadian Library Association Book of the Year awards (1966, 1968, and 1980). His books for young readers generally center on a young boy who struggles against nature and prejudice to survive. Examples include Eagle Mask (1966), the story of a boy growing to be a man on a whale hunt, Tikta’liktak: An Eskimo Legend (1965), the tale of an Eskimo boy stranded on an ice floe, and Ghost Paddle (1972), another coming-of-age account among the Inland River people of the Canadian Northwest. Houston successfully moved to contemporary themes for young readers in the late 1970s. He has written eighteen children’s books, most of which he has also illustrated.

Houston has also written serious popular fiction, including such works as The White Dawn: An Eskimo Saga (1971), Ghost Fox (1977), Spirit Wrestler (1980), Eagle Song (1983), Running West (1989), and most recently, The Ice Master (1997). The White Dawn, Houston’s first novel and his best-known work, is the story of three whalers stranded among the Eskimos. It was a Book-of-the-Month Club main selection in 1971 and released as a motion picture in 1974. In fact, many of the sixteen screenplays that Houston has written are adaptations of his books: The White Archer (1967), Akavak (1969), and Ghost Fox (1979). Spirit Wrestler was set on Baffin Island in the 1950s, and Eagle Song is a survival story of two survivors of a ship’s crew that was attacked by Indians. The Ice Master, an exciting tale of Arctic whaling set around Baffin Inland in the 1870s, has received high praise. His 1995 autobiographical memoir, Confessions of an Igloo Dweller, was a bestseller. Houston writes of what he knows: ships, the Inuit people, and the dangerous waters of the Arctic.