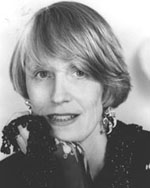 HOWE, TINA (1937- ). Obie-award-winning playwright Tina Howe often employs sea imagery as metaphoric devices in her plays. Born in Boston and graduated from Sarah Lawrence College, Howe began to have her works professionally produced in the early 1970s; her plays often reflect her love of the New England seashore. For example, a private beach between Marblehead and Gloucester on the North Shore of Massachusetts is the scene for Coastal Disturbances (first perf. 1986; pub. 1987), a romantic comedy. Holly Dancer, a young, aspiring photographer at romantic and professional crossroads, encounters an assortment of characters from her present and past, including two former love interests: a disillusioned lifeguard and a successful New York gallery owner. In a series of brief scenes reminiscent of snapshots, Howe develops Holly’s evolving perceptions about love, commitment, and creativity against an ever-changing seascape. Although Howe stresses in her production notes the importance of sustaining the illusion of sand, sky, and ocean, she, like her protagonist, experiences “technical difficulties” in attaining photographic realism, as evidenced in the play’s structure.

Through vivid stage imagery, elliptical and overlapping dialogue, and fragmented scenic construction, Howe shows how emotion reflects nature and how women in particular are biologically related to its cycles. She treats the sea as a privileged site for the self-actualization of women. The ocean, with its vast subterranean realm, becomes an alternative reality, where rational and conscious creativity and self-fulfillment can be tempered by the release of emotional and psychosexual energies. With this critically acclaimed play, which was nominated for a Tony award for Best Drama, Howe established her position as an important playwright with both artistic and commercial potential.

The sea, evoked in profuse imagery, figures prominently in Howe’s subsequent works, such as Approaching Zanzibar (first perf. 1989; pub. 1989), a panoramic road play, and even more significantly in Pride’s Crossing (1997), which dramatizes the attempts of Mabel Tidings Bigelow, a fictional New England matriarch, to swim the English Channel.

This entry was posted in H and tagged 20th Century, Coastal Life, Plays. Bookmark the permalink.