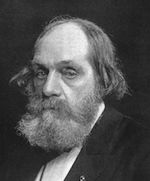 HALE, EDWARD EVERETT (1822-1909). Born in Boston, Edward Everett Hale belonged to an old New England family. His great-uncle, Captain Nathan Hale, uttered the memorable cry, “I only regret that I have but one life to lose for my country,” just before the British hanged him as a spy during the Revolutionary War. A prolific writer of fiction and nonfiction, Hale was by vocation a Unitarian minister. His essays include “The Naval History of the American Revolution” (1888) and “Paul Jones and Denis Duval” (1857) an account of “the father of the American Navy.”

The work for which Hale is best known is his historical short story “The Man without a Country” (1863), first published in The Atlantic Monthly, later appearing in a collection of Hale’s fiction, If, Yes, and Perhaps. . . (1868), and adapted into three films of the same name (1917, 1925, 1937). The story’s narrator is a retired navy captain, Frederic Ingham, who with the same name but in different guises narrates a number of Hale’s stories. Ingham traces the career of Philip Nolan, an army officer whom Aaron Burr entices into joining his treasonous plot. At his court-martial, Nolan rejects the United States and is sentenced to a life of exile aboard American ships where he will never again see or hear of his native land. Metaphorically, Nolan is doomed to be forever adrift, forever at sea with himself.

An officer named Philip Nolan did exist, but he bore only superficial resemblance to Hale’s protagonist. Nevertheless, many have assumed Hale’s fictional narrative to be rooted in fact: a sermon on patriotism, on nationalism, and even (through incidents such as an encounter with a ship bearing enchained Africans) on the evil of slavery. The numerous references to actual people and events, as well as the absence of traditional techniques, such as a turning point or plot surprises, create this verisimilitude.

The Life and Letters of Edward Everett Hale Volume Two (1917)