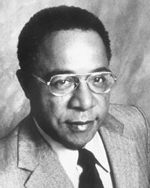 HALEY, ALEX (1921-1992). Alex Haley joined the Coast Guard as a “mess boy” at seventeen after two years of college. During World War II, aboard the cargo ship U.S.S. Murzim, he sent story after story to national magazines, with no luck. But an illiterate first-class steward’s mate set Haley to writing love letters for fellow blacks on the mess decks, with considerable reported success. After the war, Haley continued to write and eventually, eight years later, had some articles accepted. Admiral “Iceberg” Smith noticed an article of his, and soon Haley became the Coast Guard’s first chief journalist.

Haley retired from the Coast Guard in 1959 and wrote some articles for men’s magazines about historic maritime adventures. In 1961 he published an article in Reader’s Digest about the unforgettable first-class steward on the Murzim. The cofounder of the magazine, Mrs. Dewitt Wallace, very much liked the article and asked Haley to let her know if he ever needed help. Much later, when Haley wrote her about his genealogical interests, she convinced Reader’s Digest editors to help fund him.

A significant part of the twelve years of effort that was to result in Roots: The Saga of an American Family (1976) was research into maritime records of the slave trade. Haley also took passage in a modern steamer, lying stripped to his underwear in the ship’s cargo hold for ten nights to help visualize what his ancestors’ experience had been. The description of slaves’ experience during this “middle passage” from the Gambia River in Africa to Annapolis, Maryland, is one of the book’s more compelling narratives. A 1977 miniseries for television starred Maya Angelou and Le Var Burton.

After the success of Roots, Haley would often book passage on international cargo ships for several months in order to write. He spoke highly of his Coast Guard experience and often remarked that he loved the sea. by Robert Shenk