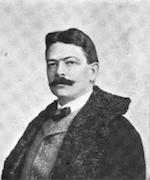 [HAINS, THORNTON JENKINS], “CAPTAIN MAYN CLEW GARNETT” (1866-1953). Named for his maternal grandfather, Admiral Thornton Jenkins, U.S.N., Thornton Jenkins Hains had a career of indefinite length as a working seaman and was licensed in both England and the United States as a navigator for large oceangoing vessels. He began a writing career in 1889 and had gained enough fame as a sea-writer to be the subject of a front-page article in the New York Times on 16 December 1903. Titled “Author Rescued at Sea,” the article recounts the sinking of Hains’ yacht Edna in a hurricane that struck on his voyage from North Carolina to the Bahamas. By then he had published at least two collections of sea stories, Tales of the South Seas (1894) and The Wind-Jammers (1899), and one novel, The Wreck of the Conemaugh (1899). Of his several other books, three are especially notable: a collection of stories mostly of sea animals, The Strife of the Sea (1903), and the novels The Black Barque (1905) and The Voyage of the Arrow (1906).

Tales of the South Seas, published in the same year as Jack London’s Call of the Wild, presents a unique, Darwinian view of sea life. The handsome, illustrated volume attracted London’s attention, as did The Voyage of the Arrow, which features an interesting, self-conscious narrator and Hains’ typically engaging, plain style. The Black Barque is a novel about the slave trade, presented in a balanced, realistic way. The title story of a later collection, The White Ghost of Disaster (published in 1912, the year of the Titanic disaster, under the name “Captain Mayn Clew Garnett”) is a memorable tale of a captain who kills himself after sinking his speeding passenger liner in a collision with an iceberg.

Captain Gore’s Courtship: his Narrative of the Affair of the Clipper “Conemaugh” and loss of the “Countess of Warwick,” as Set Down by his Friend and Counsel (1896)

The Black Barque: a tale of the pirate slave-ship Gentle Hand (1905)

The Voyage of the Arrow: to the China Seas; its Adventures and Perils, including its Capture by Sea Vultures from the Countess of Warwick, as set down by William Gore, Chief Mate (1906)