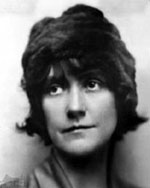 GLASPELL, SUSAN [KEATING] (1876-1948). Associated with the Provincetown Players, a group that included Eugene O’Neill, Jig Cook, and Floyd Dell in the early years of their illustrious collaboration (1916- 1922), Susan Glaspell is best known for her novels and the play Trifles (1916). The only one of her plays in which the sea figures prominently is the one-act The Outside (first perf. 1917; pub. 1920), set at a former lifesaving station between the open sea beyond Cape Cod and the curve of land that creates the natural harbor of Provincetown. The setting symbolizes the allegorical pull of the play between life force, symbolized by the harbor, and death force, symbolized by the treacherous seas. Glaspell’s language expressionistically evokes the sea and dunes. In the minimal action, two men have dragged a drowned man into what is now a home occupied by a woman and her housekeeper, both recluses. The men fail in an attempt to revive him, but their efforts and that of the anonymous Captain serve to encourage one of the women to abandon her solitude. This woman is the housekeeper, Allie Mayo, a role performed by the playwright in the original production.

Project Gutenberg via UPenn digital library (active as of 6.16)