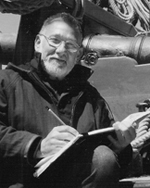 GILKERSON, WILLIAM (1936-2015). William Gilkerson wrote nine books, most of which relate directly to maritime history. His first book, Gilkerson on War–From Rocks to Rockets (1964), is an exception, as it only touches upon maritime history in the larger context of naval warfare, which, in turn, appears only in the larger context of warfare in general. The Scrimshander (1975, rev. 1978) and Maritime Arts by Wm. Gilkerson (1981) portray Gilkerson as scrimshander and painter: Maritime Arts is an exhibition catalog of such artwork displayed at the Peabody Museum of Salem, Massachusetts, in 1980. Gilkerson illustrated American Whalers in the Western Arctic (1983), written by Arctic whaling expert John Bockstoce. Its companion volume, An Arctic Whaling Sketchbook (1983), is a collection of related drawings, some of which appeared in American Whalers in the Western Arctic. The Ships of John Paul Jones (1987) is a scholarly examination of the career of John Paul Jones and of the naval architecture of the vessels that he commanded. Gilkerson’s attention to historical exactitude is nowhere more apparent than in his representations of Jones’ famous ship the Bonhomme Richard and other vessels. He also wrote a two-volume reference book about shipboard small arms entitled Boarders Away–With Steel (1991) and Boarders Away–With Fire (1993).

All of these books were progressions toward his novel Ultimate Voyage: A Book of Five Mariners (1998). A sailor since boyhood, Gilkerson framed the action of his novel in a maritime context, but there is nothing fictitious in his narrative description. From the viewpoint of a sailor, shipwright, or naval architect, the genius of this book is in the details. Ultimate Voyage is a philosophical treatise very loosely based in any actual historical period or circumstance but firmly grounded in the principles of maritime history. It takes the reader on an exploration of the author’s perception of the human condition through the metaphor of a voyage under sail, the metaphysical ramifications of which seem cunningly applicable to everyday life.

Gilkerson on War–From Rocks to Rockets (1964)