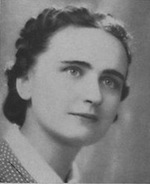 FULLER [MCCOY], IOLA (1906-1993). Born in Marcellus, Michigan, Iola Fuller worked both as a librarian and a teacher at Ferris State College before engaging in writing full-time. She won an Avery Hopwood award at the University of Michigan in 1939 for her first novel, The Loon Feather (1940), which deals with the relationships among the Ojibways of Mackinac Island and the trappers, traders, and militia who encroach upon their territory. In The Gilded Torch (1957), Fuller traces Rene Robert Cavelier, de la Salle on his route along the present-day Saint Lawrence Seaway, through the Great Lakes and down the Mississippi to claim the Louisiana Territory. The novel focuses on the hardships of the trip and suggests the effects of the explorers, missionaries, and settlers on the Great Lakes and other parts of the Northwest Territories and on the Native Americans there. by Mary DeJong Obuchowski (2000)

This entry was posted in F and tagged 20th Century, Fiction, Great Lakes. Bookmark the permalink.