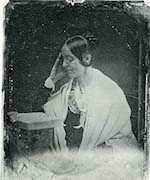 FULLER, [SARAH] MARGARET (1810-1850). Born in Cambridgeport, Massachusetts, Margaret Fuller was the eldest of nine children. Her father, a lawyer and congressman, educated her at home, and under his demanding regimen she developed her remarkable intellectual gifts. She later taught school in Boston, where she met Ralph Waldo Emerson and entered the circle of the transcendentalists. She became the first editor of their shortlived, but influential, journal, The Dial, and her association with this group ultimately led to the writing of her most famous work, Woman in the Nineteenth Century (1845), a reasoned examination and promulgation of feminism. The next year she traveled to Europe and by 1848 had settled in Rome, where she met and secretly married Giovanni Angelo, Marchese Ossoli. Returning to America in 1850, their ship was wrecked off New York, and they were drowned, along with their infant son.

Fuller’s first significant book, Summer on the Lakes, in 1843 (1844), is a record of a journey she undertook to the Great Lakes to witness the rapid settlement of that area and its effect on the land as well as the resulting displacement of the Native Americans. Her narrative, somewhat rambling and episodic, contains her observations of Niagara Falls, Chicago, the Illinois prairies, Milwaukee, Mackinac Island, and Sault Ste. Marie and the contrast between encroaching civilization and its corrupting influence upon indigenous peoples. She also includes bits of poetry, a short story, and some other unrelated writings. Although a modest success when it appeared, Summer on the Lakes remains not as well known as other contemporary travel narratives.

Woman in the Nineteenth Century (1845)