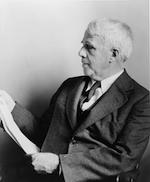 FROST, ROBERT [LEE] (1874-1963). Though Robert Frost was not a nautical writer, he did treat the sea as a subject in several poems. Best known among these are “Once by the Pacific” (1926), “Neither Out Far nor in Deep” (1934), and “Sand Dunes” (1926), and they also include “The Discovery of the Madeiras” (1949), “Does No One at All Ever Feel This Way in the Least?” (1952), “America Is Hard to See” (1951). These poems, to one degree or another, take iconoclastic views of famous seafarers and, most significantly, of the sea itself, contesting or denying its often exalted, revered, or feared properties. “America Is Hard to See” faults Christopher Columbus for his bad navigation; “Sand Dunes” claims that despite the sea’s sinking of ships and then transforming itself into dunes so as to destroy habitations, human beings will only be freed thereby to think more largely, more freely.

In “Neither Out Far nor in Deep” those on the beach all look at the sea, turning their backs on the land on which they rest. Frost seems to imply a critique of the tradition of looking for deep meanings in the sea, which, in this poem, is obscure and dull. Also antitraditional is “Once by the Pacific,” in which a sea-gazer stands on shore contemplating the approach of a violent storm on the ironically named ocean and seems to believe in its apocalyptic possibilities. Frost undercuts the apparent connection between the sea storm and God’s wrath, however, by having the speaker reiterate that it “looked” as if the storm was to be seen this way. In addition, the voice in the poem distances itself from the meanings it has evoked by saying that “Someone” (implicitly not the speaker) had better get ready for the putative coming end. Both these poems undercut the notion that the sea can mean or reveal very much to us–though many, if not most, continue to look to it for transcendent meaning.

Frost’s poems involving the sea all speak with the voices of landlubbers. His speakers never go to sea, though they imagine activities conducted there. Whether he is expressing an ironic version of Teiresias’ advice to Odysseus to put an oar on his shoulder and travel inland until the oar is mistaken for a winnowing fan (“Does No One . . .”) or saying that a storm from the east evokes thoughts of the antediluvian sea (“A Line-Storm Song” [1913]), where human meaning is concerned, for Robert Frost, Earth is earth.

This entry was posted in F and tagged 19th Century, 20th Century, Poetry. Bookmark the permalink.