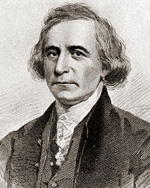 FRENEAU, PHILIP [MORIN] (1752-1832). An “occasional” poet born in New York City, Philip Freneau during his long life wrote lyric and narrative poems on a wide range of subjects. Since he spent many years working on ships, a sizable number of these concern the sea.

Freneau in 1768 entered the College of New Jersey (now Princeton University), where fellow students James Madison and Hugh Henry Brackenridge encouraged his penchant for intellectual speculation. Later, during the war against England, Freneau wrote political poetry and was tagged “the Poet of the American Revolution.” Some of Freneau’s earliest poems deal with the sea, including collegiate verses such as “The History of the Prophet Jonah” (written in 1768) and “Columbus to Ferdinand” (1770), the latter depicting Christopher Columbus as both an adventurer and a champion of reason who sought to prove that the other side of the earth was not all water. One of Freneau’s best-known collegiate poems, “The Rising Glory of America” (1771), cowritten with Brackenridge in response to the unpopular Stamp Act, predicted the emergence of a Utopian political entity extending “from the Atlantic to the Pacific shores.”

Between 1776 and 1778 Freneau avoided the chaos in the wartime colonies by working as a sailor on trading vessels in the Atlantic and Caribbean and by serving as the secretary of a sugar plantation on the island of Santa Cruz. A major poem from this period, “The Beauties of Santa Cruz” (1776), features, alongside highly romanticized descriptions of the island’s tropical landscape, Freneau’s identification with the plight of slaves. The poet’s disdain for the institution of slavery was most memorably expressed in a later poem set in the West Indies, “To Sir Toby” (1784). In 1778 Freneau returned home to enlist in the New Jersey militia, spending the next two years leading trading and privateering expeditions. In 1780 Freneau’s ship Aurora was captured by the British navy; the poet was imprisoned in New York harbor, an experience that inspired his important protest poem, “The British Prison Ship” (1780).

Between 1781 and 1783 Freneau was based in Philadelphia, where he contributed both poetry and prose to the anti-British periodical Freeman’s Journal. Although living inland, he continued to write about the sea. For example, in “On the Late Royal Sloop of War General Monk” (1782), the poet lauded the April 1782 victory of Hyder Ally over the British ship General Monk. Freneau’s “On the Memorable Victory” (1781) celebrated patriot John Paul Jones’ heroic 1779 conquest of a fleet of British warships.

Freneau captained numerous trading expeditions from 1785 to 1790, probably to earn money for his marriage to Eleanor Forman. Living apart from the woman he loved, Freneau composed elegiac poems–including “Philander: Or the Emigrant” (c. 1788), “To Cynthia” (1789), and “Florio to Amanda” (1789)–modeled on early eighteenth-century British neoclassical poetry; all of these poems depict lovers separated by the sea. During this period he also composed descriptive poems evoking the natural environment of the Caribbean and the Atlantic, including “The Hurricane” (1785) and “The Bermuda Islands” (1788).

By the early 1800s the difficulty of making a living in publishing and the need to support his family convinced Freneau to return to the sea to work as a trader. Poems from this period of sea-voyaging are more reflective and less descriptive than earlier efforts; the poet now favored romantic revelry (“Lines Written at Sea” [c.1800]) and perceptive characterizations of island people (“The Nautical Rendezvous” [1800]). About 1807 Freneau returned to New Jersey, struggled to support his family by farming, and never ventured to sea again.

In 1815 Freneau published a collection of War of 1812 poems that largely commemorate naval warfare, including “The Battle of Lake Erie” (1813), “The Terrific Torpedoes” (1814), and “On the Naval Attack near Baltimore” (1814). Although a house fire destroyed many of his manuscripts, papers, and letters in 1818, Frencau continued to write poems until his death. He was the most prolific colonial American poet, with over 550 poems and many prose pieces preserved in print.

The Poems of Philip Freneau: Poet of the American Revolution, vol. 3 (1907)