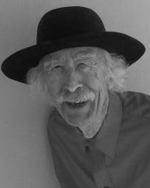 FERRINI, VINCENT (1913-2007). Vincent Ferrini was born into a blue-collar, immigrant family struggling to earn a living in the shoe factories of Lynn, Massachusetts. His first volume of poems, No Smoke (1941), records the depression-era deprivations of his early years. A reluctant graduate of high school, Ferrini read voraciously from the public library collection until World War II brought him work in a General Electric plant. Drawn by the beauty of its harbor and by the Italian fishing community, he moved to Gloucester in 1948 as his fifth book of poems on working-class life, Plow in the Ruins, was being published. Since then, his writings have focused on the changing destiny of America’s first fishing port. His first collection of verse on Gloucester, Sea Sprung (1949), evokes scenes of the port, its vessels, and its fishing community.

In 1950 he began a lifelong friendship with Charles Olson, who wrote the first Maximus poem as a letter to Ferrini. In the same year, declaring his hands extensions of his poems, he began a career as a picture-frame maker, pioneering the use of driftwood as a framing material for the seascapes and harbor scenes of local artists. Among the thirty volumes of poetry he has published, the seven volumes of Know Fish (1979-1991) chronicle most effectively his portrait of the decline of the fishing industry in his adopted home. With Whitmanesque verve and a consistently proletarian voice, Ferrini chides government bureaucracies for their inept management policies in such poems as “Fresh Fish Industry Thrown a Bone” (1976) and “The Savior” (1979) and local business interests for their shortsighted greed (“Gloucester: Why It Is As It Is,” “Squid” [both 1979], “Gloucester Aroused” [1986]). In other poems, he celebrates the glories of its seagoing past (“The Flood Time of Fishing” [1979]), the resilient strength of its Italian fisherpeople (“Da Family Dragga” [1979], “At Sea” [1984]), and the achievements of its more visionary citizenry (“Brahma” [1984], on Philip Weld, “Gus Foote: At the Fo’c’sle of City Hall” [1991], “The Luminist of Gloucester” [1991], on Fitz Hugh Lane).

In Sea Root (1959), the son of a sea captain returns from twenty years at sea to release his family from the guilt and anguish of incestuous bonds. Undersea Bread (1989) contains two relevant verse plays: Nightsea Journey, in which a fisherman whose boat sinks in a blizzard leaves behind a son struggling with a heroin addiction in a sinking fishing economy; and The Fisherwomen, in which the wives and daughters of drowned fishermen discover inner resources of strength without their men. Ferrini’s second verse play, Telling of the North Star (1954), uses the tradition of the returning ghost ship as a commentary on the ethical compromises forced upon fishermen faced with a depleted stock. The play is the text for a one-act chamber opera composed by John Corina and performed at the University of Georgia in 1981.

Ferrini, who considers himself a “deepsea Fisher of Words and Souls,” continued to write from his conviction of the unity of life and art out of his home in East Gloucester.

This entry was posted in F and tagged 20th Century, Fishing, Plays, Poetry. Bookmark the permalink.