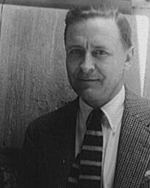 FITZGERALD, F[RANCIS]. SCOTT (1896-1940). Although not an author of sea fiction, F. Scott Fitzgerald used water as a setting and employed water imagery and related symbolism in his most important work, The Great Gatsby (1925), and to a lesser degree in Tender Is the Night (1934), set, in part, on the French Riviera.

Most of the action of The Great Gatsby occurs on Long Island’s North Shore, near Long Island Sound. The first-person narrator, Nick Carraway, is the next-door neighbor of Jay Gatsby, a mysterious westerner who has suddenly appeared on the East Coast during the extravagant and euphoric post-World War I 1920s. Incredibly wealthy and evidently involved in Prohibition crime, he is profoundly in love with Nick’s relative, Daisy, who lives across the bay in an area called East Egg. Gatsby had met Daisy when he was in the army, but Daisy had married Tom Buchanan, and they are leading unsavory, materialistic, careless lives on New York’s fast track. At Gatsby’s insistence Nick arranges a meeting between Daisy and her obsessed admirer. After a wild summer night in New York City, Daisy, driving Gatsby’s luxurious automobile back to the island, accidentally strikes and kills Myrtle, her husband, Tom’s, mistress. Myrtle’s aggrieved husband, thinking it was Gatsby at the wheel, shoots and kills him. Significantly, Gatsby is in a swimming pool, and his body continues to float after his death.

The period’s gross and barbarous materialism and its want of worthy values, symbolized by the wastelandish ash heap opposite the Wilsons’ garage, contrast to the New World’s “fresh, green breast” that greeted the early European discoverers, the Dutch sailors. The New Eden, the hopeful and bountiful promise of the new continent, was, from the moment it was discovered, doomed to be metamorphosed from an object of wonder into a commodity. The book shows a capacity for “wonder” at this New World and not at the sea itself.

The fictionally compressed art of Gatsby shares some views and fundamental emblems of that other modernist masterpiece, T. S. Eliot’s The Waste Land (1922). For example, water can renew and cleanse, even nourish, but as Phlebas the Phoenician learned, it can also bring death to the postwar civilization. Gatsby had three film adaptations: 1926, 1949 (based on the play version by Owen Gould Davis Sr., also 1949), and 1974, starring Mia Farrow and Robert Redford. The Metropolitan Opera premiered John Harbison’s opera adaptation in December 1999. by Donald Yannella (2000)

This entry was posted in F. Bookmark the permalink.