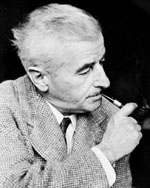 FAULKNER, WILLIAM [CUTHBERT] (1897-1962). William Faulkner, who lived and wrote in the hills of north Mississippi, often visited the Gulf coast. From April to June 1925, he resided in New Orleans, frequently sailing on yachts and riverboats. Years later he spoke of sailing the waters beyond New Orleans to traffic in the liquor trade. He admitted to running a launch out into the gulf to a sand spit where raw alcohol from Cuba was buried, though his brother has questioned the veracity of this sea experience. True or not, Faulkner turned the episode into fiction in an early story about gulf rumrunners, “Once aboard the Lugger” (1932). The story describes an expedition to an island in the gulf where the crew braves wild cattle and mosquitoes to dig up illicit alcohol.

From New Orleans on 7 July 1925, Faulkner boarded the freighter West Ivis and sailed to Genoa, Italy, for a tour of Europe. On the second day of the voyage, Faulkner appeared on deck and disposed of a manuscript about four inches thick by tearing up the pages in batches and throwing them overboard. Possibly inspired by his voyage on the freighter during his stay in Paris, Faulkner wrote “Yo Ho and Two Bottles of Rum” (1925), published in the 27 September issue of the Times Picayune. The action of this brief piece takes place aboard a freighter in the Pacific: in a drunken rage, a British mate “accidentally” murders a Chinese mess boy. Taken altogether, the sketch exposes the baselessness of the British officers’ feelings of racial superiority to their patient, inscrutable Chinese crew. Faulkner returned from Europe aboard the S.S. Republic, which docked in New Jersey 19 December 1925 after a stormy crossing.

For several weeks during the summers of 1925, 1926, and 1927, Faulkner vacationed with friends, the Stone family, in a cabin some 100 yards from the bay in the gulf town of Pascagoula, Mississippi. Faulkner spent the days swimming, sailing, and taking long walks on the tidal flats. Often he was accompanied by the Stone children, to whom he told stories of pirate treasure. In Pascagoula in the summer of 1926, he completed his second novel, Mosquitoes (1927), which is based on his experiences with the literati of New Orleans and is set aboard a yacht afloat in Lake Pontchartrain. In 1929, he returned to Pascagoula with his wife, Estelle, for a honeymoon at a beachside cottage. During this inauspicious honeymoon, Estelle attempted to commit suicide by walking out into the gulf. Faulkner called to a neighbor, who ran out into the shallow water and caught Estelle almost where the shelf of the beach dropped away into the channel. He drew on his experiences in this seaside town for The Wild Palms (1939). In this novel images of the ocean recur as Charlotte Rittenmeyer dies of a botched abortion in Pascagoula.

One other Faulkner work, “Turnabout” (1932), also features the sea. Faulkner seems to have drawn on his own experience in 1918 training to be a Royal Air Force pilot in this World War I story, which pits American airmen against British seamen. At first, the American pilot, Bogard, feels immensely superior to Hope, a young British naval officer. But when Bogard accompanies Hope and his mate, Ronnie, on a dangerous torpedo mission, Bogard is deeply moved by the British seamen’s spectacular courage.