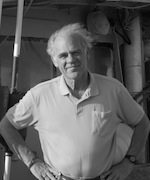 DEY, RICHARD (1945-) is an American poet born in 1945 who writes of New England and the West Indies. As a teenager he sailed in the Schooner Tabor Boy out of Marion, Massachusetts. After serving in the US Army as a journalist in Washington DC, he graduated from Harvard College in 1973, where he was poetry editor of The Harvard Advocate. In the summer of 1971, while working as crew in a charter yacht, he first visited Bequia, a dependency of St. Vincent in the Grenadines. The island proved to be the inspiration for many of his works. After college Dey worked as an offshore lobsterman out of Westport Point, Massachusetts, and as a writer in the Windward Islands. During this time, he started publishing poems in Poetry, Harvard Magazine, and Sail, among other publications, and articles in Harvard Magazine, Yachting, Sail and the Boston Globe, among others.

Subsequently, Dey worked in publishing and as a professor of maritime literature and history in Long Island University’s SEAmester program. He has written two collections of poetry. The first and larger has focused on Bequia and in various iterations includes Bequia Poems (1988) and Selected Bequia Poems (2009). The second is a northern counterpart to his Caribbean work, The Loss of the Schooner Kestrel and Other Poems (2012). He edited The Schooner Pilgrim’s Progress: A Voyage around the World 1932–1934 by Donald C. Starr (1996). His non-fiction account of the life of Morris Nicholson, Adventures in the Trade Wind (2009), is touted by Llewellyn Howland III as “the next best thing to running south from Martinique to Grenada with Nicholson as your watch mate.” This narrative of Nicholson’s career as a charter boat skipper reflects the growth of the industry from a single yacht in Antigua to hundreds run by companies such as The Moorings. Adventures in the Trade Wind also captures the change in the islands from neglected colonial outposts to independent mini-states and demonstrates the importance of charter yachts to their economies.

In his “Preface” to The Loss of the Schooner Kestrel and Other Poems, Dey identifies his goal in writing poetry as choosing incidents and situations from coastal boating life and describing them in language used by sailors that is still understandable to landsmen. His work utilizes many of the conventions of sea literature as well as marine imagery. His aim is to create what he calls “The Offshore Perspective”—a sailor’s view of the human condition. Dey’s poem “Exploring the First Map of Bequia” exemplifies both his immense love and respect for the island as well as his ability to craft prose appropriate to his “Offshore Perspective”:

as if to a lover’s moist eyes
wide in the golden tropic light,
yet to go ashore or write
but found-out, taken by surprise,

aroused. I could have had no clue
I was coming to a second birth
or that, at an end of the earth,
I’d start a life’s work, charting the view.

Dey’s preface also brings to light a problem found in all sea poetry—that for centuries sea poetry was written rarely by sailors but by “the observer class” and that only in recent times have sailors been educated, and the educated included sailors. It is out of the latter group that Dey emerges, one of the first—if not the first—literary yachtsman (and commercial fisherman) to write serious poems about yachts and yachtsmen.