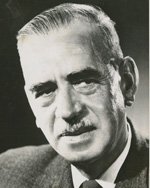 DESROSIERS, LEO-PAUL (1896-1967). Leo-Paul Desrosiers was born in Berthier-en-Haut, Quebec, a village on the banks of the Saint Lawrence River northeast of Montreal. His happy childhood provided him with material for his first work, Ames et Paysages (1922), and a job as a government news editor gave him the time he needed to write Nord-Sud (1931). Les Engages du Grand Portage (1938), generally considered his best-written novel, tells of the ambitions and hardships of fur-trading voyageurs paddling canoes through calm and storm on the Great Lakes and connected waters in the early 1800s. Vacations in his beloved Gaspe, a small fishing village on the Gulf of Saint Lawrence, inspired him to use this locale as a setting for his psychological novel L’Ampoule d’or (1951), for which he won the Prix Duvernay. Other works include Commencements (1939), Les Opiniatres (1941), Sources (1942), Iroquoisie (1947), and the trilogy Vous Qui Passez (1958-1960).