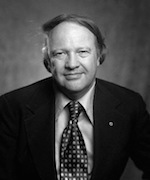 DICKEY, JAMES [LAFAYETTE] (1923-1997). James Dickey, noted poet, novelist, and critic, was born in Atlanta, Georgia. During World War II, he served in a night-fighter squadron in the South Pacific. In the late 1940s he attended Vanderbilt University, during which time he also began writing and publishing poems. He received a master’s degree from Vanderbilt and taught at Rice University in Houston from 1950 to 1954, taking a two-year leave of absence to serve in the Korean War. After successfully forging a second career as an advertising copywriter and executive, Dickey returned to poetry full-time in 1960 and became a professor and poet-in-residence at the University of South Carolina in 1968.

As a poet, Dickey has been labeled a romantic modernist. He is primarily concerned with the rapturous possibilities of nature, as in “The Movement of Fish” (1961) and “The Heaven of Animals” (1961), and with the life-awakening experiences of war and violence as contrasted to the deadening effects of the suburban milieu. His poetry, which appeared throughout the 1950s, 1960s, and 1970s in various literary journals and magazines, has been collected in several volumes: Into the Stone (1960), Drowning with Others (1962), Buckdancer’s Choice (1965), and The Strength of Fields (1979).

In a prose-poem meditation on fishing, “Pursuing the Grey Soul” (1978), Dickey characterizes the sea as an otherworldly setting that nourishes man’s “wished-for vastness of spirit.” While this and many of his other works focus on the creek-fed wilderness of Dickey’s youth, the sea remains an important setting for his explorations of the brutal aspects of nature. Dickey displays a particular fascination with sharks in such poems as “The Shark at the Window” (1951), which centers on the image of a shark behind aquarium glass, and “The Shark’s Parlor” (1965), a humorous, yet stirring, account of a shark-and-fisherman tug-of-war on Cumberland Island, Georgia. Dickey’s other sea-related poems include “The Ax-God: Sea-Pursuit” (1978), “Undersea Fragments in Colons” (1979), and “Below the Lighthouse” (1959).

This entry was posted in D and tagged 20th Century, Poetry, War. Bookmark the permalink.