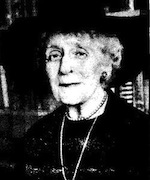 DONER, MARY FRANCES (1893-1985). Mary Frances Doner set many of her books near her birthplace, Port Huron, Michigan. She supplied around 250 short stories for pulp magazines early in her career and in the 1930s began producing novels and nonfiction, over twenty-eight books altogether. Her Great Lakes novels include Fool’s Heaven (1932), Some Fell among Thorns (1939), Chalice (1940), Not by Bread Alone (1941), Glass Mountain (1942), O Distant Star (1944), Ravenswood (1948), The Wind and the Fog (1963), and Not by Appointment (1972). They focus on the people who sailed the freight and passenger ships on the Lakes, their ambitions and joy in their work, and the drama of storms and accidents; and on the wives, girlfriends, and children who awaited them in the cities and small towns on the shores. While the River Flows (1962) also treats ecological matters, such as the influence of the Soo Locks on the water level and hence on values of shoreline property and of industry on the wildlife of the rivers and lakes; Thine Is the Power (1972) discusses stored power like that provided by a plant at Ludington, Michigan. A biography, The Salvager: The Lift of Captain Tom Reid on the Great Lakes (1958), describes shipwrecks and their aftermath in the late nineteenth and early twentieth centuries.

The Salvager: The Lift of Captain Tom Reid on the Great Lakes (1958)