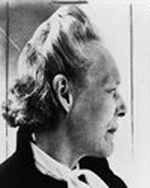 D[OOLITTLE]., H[ILDA]. (1886-1961). H. D., a poet, novelist, dramatist, and translator whose works often incorporate sea imagery, was born in Pennsylvania. Childhood visits to the seacoasts of Rhode Island and Maine first inspired H. D., best known for her imagist poetry, to write about the sea. “Hermes of the Ways” (1913), one of her earliest published poems, imagines the god of the crossroads standing at the tide line, the shifting boundary between sea and sand. Images of stormy beaches and seaside gardens link the poems collected in Sea Garden (1916), her first book of poetry. Poems such as “Sea Rose” (1915), “Sea Iris” (1915), and “Sea Violet” (1916) celebrate the strength and beauty of the flowers that thrive in the harsh conditions at the water’s edge. In “Sheltered Garden” (1916) the poet rejects the oppressive peace of an inland orchard protected from the wind and waves in favor of the freedom of the coastline. Other books by H. D. voice this fascination with the sea, including Hymen (1921), a collection of poems; Hippolytus Temporizes (1928), a play; Hedylus (1928), a novel; and Red Roses from Bronze (1931), a volume of poetry. She died in Switzerland in 1961.

This entry was posted in D and tagged 20th Century, Fiction, Plays, Poetry. Bookmark the permalink.