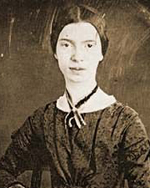 DICKINSON, EMILY [ELIZABETH] (1830-1886). Although the great American poet Emily Dickinson is frequently quoted as saying she “never saw the Sea” (P 1052), it seems probable that the reclusive native of Amherst, Massachusetts, may have glimpsed the Atlantic coast on her occasional girlhood trips to Boston or when she and her sister visited their congressman father in Washington. Whether or not she physically witnessed the ocean, however, she knew it through reading the Bible, Henry Wadsworth Longfellow, Ik Marvell, Elizabeth and Robert Browning, and other favorite writers. She also knew it through reports of European travel by family friends, especially Samuel Bowles.

Geographic allusions to the Caspian Sea, the Red Sea, the Spice Isles, and other exotic places reached in her time only by ocean voyages reveal Dickinson’s excited response to explorations widely reported in the magazines and newspapers to which her family subscribed. So, too, her ability to imagine the pine tree at her bedroom window as “Just a Sea–with a Stem–” (P 797) demonstrates the power of her imagination to transcend landlocked circumstances. Her poems reflect Dickinson’s ability to imagine the mountain-born sailor’s exultant joy when first venturing upon ocean (P 76) or the diver’s pride in emerging with a pearl (P 84), but they also sketch more idiosyncratic and disturbing fantasies involving a hot-air balloon plummeting into the sea (P 700), a tiny boat spinning and slipping into its abyss (P 723), a brook engaging in subtle negotiations with the sea (P 1210), or a drop of river water’s confused response to ocean’s obliterating seduction (P 284).

Although a lyric poet, Dickinson sometimes distilled into her poems narrative elements about disasters at sea. “Glee–The great storm is over–” (P 619), for example, contrasts ways in which people relate and receive stories about shipwreck: adult narrators celebrate the survival of four mariners while their children silently wonder about the forty who died. Although “Adrift! A little boat adrift!” (P 30) ends with angels welcoming a sunken craft, “The waters chased him as he fled” (P 1749) takes a starkly naturalistic approach to man’s unequal battle with the sea.

It is as a symbol of the fascinating and frightening unknown, however, that the ocean appears most characteristically in Dickinson’s writings. Analogous to death, her circumferential “Crescent in the Sea” figures as the mystery to be confronted between mortal life and immortality, while the soul pursues its dizzying voyage between Eternity behind it and Immortality ahead (P 721). Taking a venturesome approach to life as quest, Dickinson apparently maintained through life the attitude she expressed in an 1850 letter to a girlhood friend: “The shore is safer, Abiah,” she wrote, “but I love to buffet the sea” (L 39). by Jane Donahue Eberwein (2000)

“Just a Sea—with a Stem—“
“Glee—The great storm is over—“
“Adrift! A little boat adrift!”
“The waters chased him as he fled”
“I started Early—Took my Dog—“
“Wild Nights—Wild Nights!”
“Rowing in Eden—.”
“’Master’ Letters”
“Crescent in the Sea”
“Exultation is the going.”

This entry was posted in D and tagged 19th Century, Poetry. Bookmark the permalink.