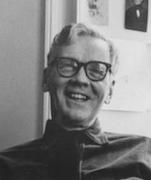 COXE, LOUIS O[SBORNE]. (1918-1993). Louis O. Coxe was a student in Allen Tate’s Creative Arts program at Princeton when Pearl Harbor occurred. Having grown up in Salem, Massachusetts, Coxe joined the navy. He came to regard his wartime service at sea as the central experience of his life.

Coxe’s naval service involved strenuous duty aboard small patrol vessels convoying cargo and amphibious ships to landings in the central Pacific. During the war Coxe wrote poetry about his experiences, sometimes meeting with fellow naval officer and poet William Meredith to discuss their poetry. After leaving the service, Coxe published The Sea Faring and Other Poems (1947). This volume is dominated by poems with naval subjects, such as “The Sea Faring,” “Red Right Returning,” and “Convoy,” although New England and its literary seafarers also find their place in this and (more often) in later books. Among Coxe’s later naval poetry is “The Strait,” the concluding poem in The Last Hero and Other Poems (1965). This long poem memorably elegizes the death of the cruiser Houston during the 1942 Battle of the Java Sea. Other Coxe poems, such as “Nuns on Shipboard” and “The Navigator Contemplates Heaven,” use naval metaphors to affirm orthodox Christian values. Much of Coxe’s writing is not based on personal experience but still has seafaring as a central subject. Coxe and Robert Chapman collaborated in writing Billy Budd (1951), a play based on Herman Melville’s novella that ran on Broadway for four months after receiving good reviews when it premiered at the Experimental Theatre. This version featured Lee Marvin in his Broadway debut. The Middle Passage (1960), perhaps Coxe’s best single work, is a long narrative poem about the slave trade in New England. Based on a personal narrative of the slaver Theodore Canot, this poem narrates in gripping detail the brutal transport of slaves to America aboard a Salem whaling vessel. The poem condemns New England mercantilism and racism and also offers a poetic reprise of the fall of humankind. by Robert Shenk (2000)