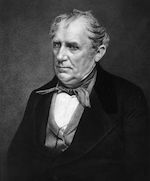 COOPER, JAMES FENIMORE (1789-1851). With The Pilot (1824) James Fenimore Cooper invented the sea novel, for the first time employing the dominant literary form of the nineteenth century as the vehicle for a fiction in which the sea and the ship provide the principal settings, and seamen become the chief characters. In some dozen subsequent books, he explored and expanded the possibilities of the new genre, establishing it as a popular and versatile expression of the interest romanticism had engendered in the interaction of the natural world and human experience. In making maritime life an effective literary subject, Cooper inspired an armada of imitators in Europe and America and pointed the way for such later major writers as Herman Melville and Joseph Conrad, both of whom acknowledged their debt to him.

Like all successful writers of the sea, Cooper himself had been a sailor. Growing up in the inland fastness of his father’s settlement at Cooperstown, New York, he first came in contact with sailors and shipping as a passenger in the sloops that plied the Hudson River between Albany and Manhattan, virtually the only means of access to the outside world in the days before railroads. In the summer of 1806, expelled from Yale University for disciplinary reasons and bored and restless on his return to Cooperstown, the sixteen-year-old Cooper apparently used the Hudson as an escape route, running away from home in pursuit of adventure. Frustrated in his attempt to join a filibustering expedition to Venezuela, he shipped before the mast in the merchantman Stirling, bound for England. After clearing New York in early September, the ship stopped at Cowes for orders and then proceeded to London, arriving there in mid-October. In early November she sailed for Spain, returning to London in early May 1807. At last the Stirling set sail for the United States in late July and made her landfall off Delaware on 15 September, Cooper’s eighteenth birthday.

Cooper’s boyhood voyage surely provided the adventure that he had sought. To the ordinary hazards of forecastle life–of storms in the Bay of Biscay and near-hurricanes in the Gulf Stream–had been added the dangers imposed by the belligerents in the Napoleonic Wars, including close encounters with British press-gangs and French privateers. But the voyage served a practical purpose as well, qualifying the young man for an appointment as a midshipman in the U.S. Navy. Entering the navy on 1 January 1808, he saw service in the bomb-ketch Vesuvius in New York harbor, then at the wilderness outpost of Oswego on Lake Ontario, and finally in the sloop-of-war Wasp, once again at New York. In May 1810 he left the navy in order to marry, but throughout the rest of his life his interest in naval affairs remained intense. He kept up his acquaintance with the officers with whom he had served, above all, with his closest friend, William Branford Shubrick, periodically visited various naval installations and vessels, and wholeheartedly joined in every major naval controversy of his time. In incidental ways, too, Cooper kept in touch with the sea. In 1819, just before he discovered that he could support himself by writing, he purchased the whaling ship Union, overseeing her fitting-out and commanding her on short coastal passages in the intervals between her three voyages to the Brazil banks. He took delight in his passage to England in 1826 in the packet ship Hudson, as he and his family crossed the Atlantic to begin a seven-year residence in Europe, the happiest moments of which occurred when he chartered and commanded a felucca on the Mediterranean.

It is ironic that a writer whose experience and interests were so focused upon maritime life should be remembered today almost exclusively as the author of the Leatherstocking Tales, those narratives of the inland frontier. But in Cooper’s own day he was celebrated at least as much for his sea novels as for his wilderness tales. Indeed, within the corpus of his thirty-two works of fiction, the sea novels outnumber the Indian novels as well as the novels of social criticism. Only the accident of history by which the continental frontier came to displace the maritime frontier in the American memory and imagination accounts for the fact that Cooper’s fiction is now popularly associated with the wilderness rather than with the ocean.

The core of Cooper’s achievement as a writer of the sea consists of nine novels. The first three–The Pilot, The Red Rover (1827), and The Water-Witch (1830)–are tightly related in subject, theme, and tone. Written in the most exuberant phase of Cooper’s literary career and at the height of his international popularity, they are intensely romantic works, employing central characters who are at once superb seamen and Byronic rebels against the constraints of conventional society. For them the ship is the graceful and responsive instrument of her commander’s will; the ocean is the arena of freedom and self-realization. In all three books the aura of glamour is enhanced by the distancing provided by their eighteenth-century settings.

In Mercedes of Castile (1840), The Two Admirals (1842), and The Wing-and-Wing (1842), Cooper again chose to set his fictions in the past, but for wholly different purposes. In these novels the past becomes the center of interest, not merely a device for thickening an exotic atmosphere. No longer operating in the never-never land of romance, maritime characters and action serve to illustrate and comment upon a succession of grand historical panoramas, from the first voyage of Christopher Columbus in Mercedes, to great fleet actions of the Royal Navy in the eighteenth century in Two Admirals, to naval warfare in the Mediterranean in the Napoleonic era in Wing-and-Wing. Here the novelist borders on the historian, as he adopts the sober tone and the documentary concerns appropriate to his materials, all drawn from the grand maritime past of Europe.

In his last three sea novels–Afloat and Ashore (1844), Jack Tier (1846-1848), and The Sea Lions (1849)–Cooper carried the genre into entirely new areas. He was now writing for an audience no longer entranced by the pageantry of Sir Walter Scott but by the familiar comedy and pathos of Charles Dickens, an audience, moreover, whose view of maritime life had been revolutionized by the realism and reforming zeal of Richard Henry Dana’s enormously influential Two Years before the Mast (1840). Responding to these changes in the taste and expectations of his readers and surely responding as well to his own darkening view of life, Cooper abandoned both romantic glamour and historical pomp for a far more intimate, realistic, and somber mode. The result in the double novel Afloat and Ashore is a first-person account of a young American’s progress from the forecastle to command of a merchantman, a nautical career that ends in shipwreck and debtor’s prison. In the serially publishedJack Tier he turned the materials of his early sea romances inside out, writing a bitter tale of betrayal and cruelty that is set not in a shimmering past but in a grimy present. In The Sea Lions, which Melville reviewed, Cooper curiously anticipated the design of Moby-Dick (1851) by shaping a tale of metaphysical discovery and spiritual renewal from the humble materials of the southern seal fishery.

Beyond these nine novels, Cooper’s writings make frequent and important reference to die sea. Nautical action and characters figure prominently in the allegorical satire The Monikins (1835); inHomeward Bound (1838), a book that Cooper planned as a social satire but that turned into a sea tale; in the terraqueous The Pathfinder (1840), in which he combined the materials of his Leatherstocking Tales with those of the sea novels; and in The Crater (1847), his powerful and visionary allegory of an America given over to greed and demagoguery.

Cooper’s contribution to maritime literature does not end with his fiction. His polemic writings The Battle of Lake Erie (1843) and his “Review” (1844) of the court-martial of Alexander Slidell Mackenzie, commander of the Somers, are vigorously argued and authoritative. His History of the Navy of the United States of America (1839), the first extended and responsible treatment of that institution, and his Lives of Distinguished Naval Officers (1846) are both invaluable for their author’s firsthand acquaintance with many of their subjects. The same is true of his life of a not-so-distinguished seaman,Ned Myers (1843), the account of the career of a broken-down old sailor who as a boy had been Cooper’s shipmate in the Stirling.

But his highest achievement as a writer of the sea remains his fiction, in which he succeeded in making maritime experience serve as a magnified and intensified image of all experience. Contrasting Cooper with his predecessors and many of his contemporaries, Joseph Conrad observed in his Notes on Life and Letters (1921) that in Cooper’s sea novels “nature was not the framework, it was an essential part of existence”; in them, he said, “the sea inter-penetrates with life” (55).

The Mercedes of Castile: or The Voyage to Cathay (1840)