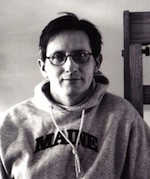 COOMER, JOE (1958- ). A transplanted Texan, Joe Coomer married into a boating family and has spent a great deal of time off the Maine coast becoming adept at sailing. In 1992 Coomer purchased a wooden motor boat and recounted his adventures in his journal, Sailing in a Spoonful of Water: A Man, a Family, and a Vintage Wooden Boat (1997). He recalls several incidents involving seasick guests, failing engines, and ensnared seagulls.

Of greater interest is his haunting novel Beachcombing for a Shipwrecked God (1995), the story of Charlotte, whose husband, Jonah, has recently died in a car wreck, perhaps a suicide. Charlotte flees her husband’s clinging, grieving parents in Kentucky and makes her way to Portsmouth, New Hampshire. There she whimsically decides to rent a room on a boat with Grace, an aging widow who owns the boat, and Chloe, an overweight young woman who works in a novelty shop and who becomes pregnant by an abusive, exploitative young man. The three women work through their individual dividual problems collectively. In particular, for Charlotte, their bond forces her to confront the difficult truth that her husband never really loved her, although she desperately loved him. The pain of this awakening realization motivates her to sift through her past and that of her shipmates in an effort to reclaim emotional balance. An archaeologist, Charlotte literally digs her way through a seventeenth-century cemetery in an effort to recover Portsmouth’s lost history and bury her own lingering memories.

When Grace’s memory fails after a stroke, Charlotte must also become a sailor because Grace’s daughter wishes to sell the boat and put Grace into a nursing facility. Charlotte and Chloe steal Grace’s boat, the Rosinante, and embark upon a quixotic journey, hoping that Grace’s memory returns before the authorities apprehend them. Charlotte and Chloe sail from the port where Grace has doggedly tied her boat since the death of her husband, “Sweet George.” The women happen across marked charts for Prince Edward Island and head there. They discover that Grace had compiled the charts because she had long intended to visit the island, the setting of George’s favorite book. Through Chloe’s latent seamanship, inherited from her fisherman father, the women evade the Canadian police for a time but are finally captured and imprisoned. When Grace fortuitously recovers her memory, they maintain their sorority, nurturing each other and the baby that Chloe eventually delivers.

Beachcombing for a Shipwrecked God (1995)