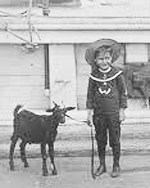 COLCORD, LINCOLN ROSS (1883-1947). Lincoln Ross Colcord, author of sea fiction and maritime historian, was born at sea aboard the bark Charlotte A. Littlefield, commanded by his father, Lincoln Alden Colcord of Searsport, Maine. Colcord spent much of his first fourteen years aboard deepwater vessels, an experience that instilled in the boy an abiding love of the sea and strongly influenced his interests and pursuits of later years. Fifth-generation seafarers, Colcord and his sister are the subjects of Parker Bishop Albee Jr.’s Letters from Sea, 1882-1901: Joanna and Lincoln Colcord’s Seafaring Childhood (1999).

By 1916 Colcord emerged as an important literary figure. Macmillan had published three of his books, and some twenty sea stories and several poems had appeared in magazines such as American, Bookman, McClure’s, and Hampton. Bert Bender wrote in Sea Brothers: The Tradition of American Sea Fiction from Moby-Dick to the Present (1988) that the typhoon scene that appears in Colcord’s sea novel The Drifting Diamond (1912) would have been appreciated even by Herman Melville. In reviewing Colcord’s first book of short stories of the sea, The Game of Life and Death (1914), the New Tork Times (1 November 1914) compared him favorably with Joseph Conrad, suggesting that “the spirit of the sea and the mystery of the Orient” infuse the works of both authors.

Following another book of sea stories, An Instrument of the Gods (1922), Colcord turned increasingly to the research and writing of maritime history. He assisted his sister, Joanna Carver Colcord, with her collection of chanteys, Roll and Go: Songs of American Sailormen (1924). Colcord also compiled Record of Vessels Built on Penobscot River and Bay (1932).

In 1926 he became acquainted with Ole Edvart Rolvaag, a novelist who had spent his youth at sea as a fisherman off the coast of Norway. Working closely with the author, Colcord translated Rolvaag’s first book, Giants in the Earth: A Saga of the Prairie (1927), from the Norwegian. The friendship between these two sailors led to Colcord’s biographical article, “Rolvaag the Fisherman Shook His Fist at Fate” (The American Magazine [March 1928]).

The late 1920s found Colcord reviewing maritime and naval books for the New York Herald Tribune. In this capacity he reviewed a purported autobiography, The Cradle of the Deep (1929), by actress Joan Lowell, who claimed to have spent her first seventeen years at sea; Colcord’s review exposed her work as fiction. His expose caused a sensational literary controversy, and he emerged more firmly established than ever as a preeminent authority on the sea. In 1936 he proved instrumental in founding the Penobscot Marine Museum in Maine. The American Neptune was in part Colcord’s creation, and he served as an editor and contributor until his death.