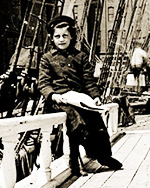 COLCORD, JOANNA CARVER (1882-1960). Born aboard the Charlotte A. Littlefield, a vessel commanded by her father, Joanna Carver Colcord spent her first eighteen years at sea. She went ashore to attend the University of Maine and graduated in 1906 with a degree in chemistry. Colcord had a successful career as a social worker and was the author of numerous works on the subject, but her interest in seafaring culture never waned. In 1924 she compiled the first comprehensive collection of American sea songs, Roll and Go: Songs of American Sailormen, which was revised and reissued as Songs of American Sailormen (1938). Sea Language Comes Ashore followed in 1945, as did several articles in The American Neptune on family life at sea. When she was posted to the Virgin Islands by the American Red Cross, Colcord undertook a study of West Indian songs and corresponded on the subject with folklorists John and Alan Lomax at the Library of Congress. “Storm Along: An American Sea Anthology,” an unpublished manuscript that presents a timeline of American history illustrated with relevant sea poetry, was deposited at the Peabody Essex Museum in Salem, Massachusetts, in 1947.

Though she spent almost two decades at sea, Joanna Colcord was concerned that her gender would make hers a less acceptable voice of the seafaring community, and she considered publishing Roll and Go under her initials only. Her brother (and shipmate), the poet Lincoln Colcord, convinced her otherwise. by Mary Malloy (2000)