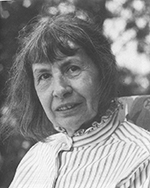 AMY CLAMPITT (1920–1994). Born and raised on a small farm in Iowa, this poet, who was best known for her highly cultured work, wrote a few extraordinary sea poems. Here are lines from the first:

The ocean,
cumbered by no business more urgent
than keeping open old accounts
that never balanced,
goes on shuffling its millenniums
of quartz, granite, and basalt.

It behaves
toward the permutations of novelty—
driftwood and shipwreck, last night’s
beer cans, spilt oil, the coughed-up
residue of plastic—with random
impartiality, playing catch or tag
or touch-last like a terrier,
turning the same thing over and over,
over and over. For the ocean, nothing
is beneath consideration.

These lines from “Beach Glass,” an early poem in her first collection, set the reader up for the speaker’s hunt for sea glass on the beach. The poem, however, turns out to be about sand, and about how nothing, physical or intellectual, is, in the tumult of sea time, built to last.

Amy Clampitt graduated from Grinnell College in 1941, and lived from that time on mainly in New York City, where she worked as a secretary at Oxford University Press, a reference librarian at the Audubon Society, and freelance researcher and editor. She summered in Corea, Maine, traveled in England, Italy, and Greece, and wrote novels that did not get published.

Clampitt was a high-wired, highly cultured poet who wrote high-charged, highly erudite, descriptive, digressive poems. They reflect her life in Manhattan, her love of literature, her travels abroad, her prairie past, her passion for birds and flowers, her companionship with an unnamed man, and her intellectual concerns, including a wavering but stubborn spirituality.

Her poetry was an intense late flowering that brought much critical attention. The recipient of a Guggenheim Fellowship in 1982, and of an Academy of American Poets fellowship in 1984, she was named a MacArthur Prize Fellow in 1992. She was a member of the American Academy of Arts and Letters and taught writing at the College of William and Mary, Amherst College, and Smith College.

Her summers over several decades in a rental cottage on the waterfront of Corea yielded her sea poems. This small working harbor thick with lobster boats and traps lies on the extreme southeast side of the Schoodic Peninsula, about six miles due east of Bar Harbor as the crow flies. ‘Tit Manan lighthouse stands prominently to the south-southeast, a mile off.

A second extraordinary sea poem, “What the Light Was Like,” served as the title poem for her second collection and is representative of her work. While the narrative core of the poem is maritime, it is enveloped by her usual obsessions—birds, butterflies, flowers, trees and allusions to high culture, rendered lyrically. Composed in twenty-nine stanzas of six-lines each, it is discursive, digressive, descriptive, syntactically dense, with a baroque vocabulary. “What the Light Was Like” is an elegy for a lobsterman who went out to work one morning and didn’t come back. A search was conducted. Days later, his boat, its fuel burned, was found some fifty miles southwest of Corea, off Matinicus Rock, a sanctuary of puffins. The victim of a stroke or heart attack, he was found lodged amongst his gear on the afterdeck.

The elegy approaches greatness on many levels, not least for the summer visitor’s questioning “what the light was like” in the lobsterman’s last glimpse of planet Earth and, perhaps, his first glimpse of what Hamlet called “the undiscovered country.”

[the light] that’s always shifting—from
a nimbus gone berserk
to a single gorget, a cathedral train of blinking, or
the fogbound shroud

that can turn anywhere into a nowhere.

Clampitt wrote nearly a dozen sea-related poems, the majority appearing in her first two books. “Fog” an early imagist poem capturing the sight, feel, and sound of its namesake, begins: “A vagueness comes over everything, / as though proving color and contour / alike dispensable.” “Marine Surface, Low Overcast” is an associative meditation on the grandeur of nature which she finds unequaled by anything manmade:

this wind silver
rumpling as of oatfields,
a suede of meadow,
a nub, a nap, a mane of lustre
lithe as the slide
of muscle in its
sheath of skin

“The Cormorant in Its Element” is an unrhymed sonnet that displays equally her empathetic interest in birds and command of descriptive language. It starts:

That boney potbellied arrow, wing-pumping along
implacably, with a ramrod’s rigid adherence,
airborne, to the horizontal, discloses talents
one would never have guessed at. Plummeting

waterward, big black feet splayed for a landing
gear, slim head turning and turning, vermilion-
strapped, this way and that

Clampitt wrote, when she wrote about the sea, as an observer from her shoreside summer perch in Corea. According to Mary Jo Salter’s “Foreword” to The Collected Poems, she refused to fly in airplanes and made her numerous trips to Europe and back by ocean liner. Not a single published poem reflects this experience.

However, in her letters, some of which appear in Love, Amy, a selection, there are two written while making eastbound passages on ocean liners to the Mediterranean. We learn she does not get seasick, enjoys sunbathing and partying, and that shipboard life among her fellow travelers, along with forays ashore, are her main interests. One entry made aboard the Greek T.S.S. Olympia on 3 May 1965 gives the idea of her at sea: “Without doubt this has been the most thoroughly delightful crossing I have ever made. Things went on getting better and better when it began to seem that they couldn’t be any more enchanting. That fabulous day when we entered the Straits of Gibraltar and found ourselves in a blue, calm Mediterranean, ended with a Mediterranean sunset—all rose and indigo with glowing bands of clouds across the west after the sun went down. The day ended, but the night went on and on, and a good deal of it was spent on deck, singing under the stars, with an interlude below, in a part of the ship where the fun didn’t begin until midnight, when a Greek band started playing….”

It was her shoreside time in Corea, Maine, that provided her sense of the sea and of those who work on it.

“Handed Down,” a third extraordinary sea poem, is a late one in Clampitt’s final collection. While “What the Light Was Like” could be seen as a report from Corea, “Handed Down” seems like a summary of her summers there, at once a tour of the local cemetery and a retelling of a wharfside story she’d learned about. The poem’s diction is uncharacteristically plain, the syntax simple, the highbrow literary allusions absent. As if hedging her bets, she seems to have descended from her mandarin perch to shoreside folk culture. Perhaps her truest sea poem, it begins:

Raymond Hodgkins, his dragger last seen
in heavy seas off Schoodic, night falling
and still no word of him; and before him

goes on and on

The middle of the elegy tells the particular story of Ray Dunbar, who was lost with the Lillian Mae, and of the search for his body. It ends:

It’s the names,
the roll call handed on and let down

in heavy seas, the visibility near zero,
the solitude total, night falling—it’s the names
of the dead, kept alive, they still hold on to.