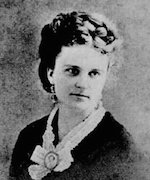 CHOPIN, KATE [O’FLAHERTY] (1850-1904). Born in St. Louis, Missouri, Kate Chopin had no experience of the sea until her three-month European honeymoon in 1870. On her return to the United States, she moved with her husband to the coastal city of New Orleans, the setting of her best-known novel, The Awakening (1899). Like Chopin’s other fiction, The Awakening can be aligned with nineteenth-century local color and regional works; however, its complex representation of the sea and the protagonist’s response to it align it with symbolic, psychological, and philosophical literature.At the upper-middle-class seaside resort where the novel opens, Edna Pontellier, a wife and mother, expresses a new consciousness of her senses and of unlimited possibilities by learning to swim in the sea. In describing Edna’s awakening, Chopin writes with a lyrical prose that reflects the sensuous whispering of waves. Aware of the sea’s danger, Edna nevertheless defies that danger just as she increasingly defies social conventions in accordance with her own impulses. Chopin points to potential problems in Edna’s romantic attitude when, charmed by Creole folktales regarding hidden pirate treasure and a Gulf Spirit’s search for a lovely mortal, Edna leaves her family for a day to sail away with a young man to a provincial island. (In her only story concerning the sea, “At Cheniere Caminada” [1894], which is set on this same island, Chopin recounts the nearly tragic infatuation that a young island man develops for a sophisticated New Orleans woman when he takes her sailing on the enchanted Gulf waters.) In The Awakening‘s conclusion, Edna, alienated from society and family, returns to the seaside resort, symbolically removes her incumbering bathing suit, and takes her final swim. Readers of Chopin’s novel continue to debate whether Edna’s suicide is narcissistic or liberating, self-destructive or self-fulfilling.