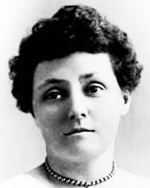 CATHERWOOD, MARY HARTWELL (1847-1902). Mary Hartwell Catherwood began her career with realistic stories of the midwest frontier but focused on stories of the French in early America after her novel The Romance of Dollard (1888). This interest merged with her love for Mackinac Island, where she spent her summers from 1892 to 1899, resulting in several works of fiction.

The White Islander (1893) tells melodramatically of Alexander Henry’s escape from Fort Michilimackinac during “Pontiac’s conspiracy.” Catherwood probably relied on Francis Parkman’s historical work here, as she often did, but the love for Mackinac Island expressed through her descriptions is distinctly her own. The stories in Mackinac and Other Stories (1899) are based on both historical research and folklore. For example, “Marianson” tells how a beautiful French widow saved a Canadian deserter from the British and Sioux forces as they were about to attack the Americans in the Mackinac fortress during the War of 1812. She fell in love with him and arranged for his escape but, upon returning to the cave where he was hidden, found that the Sioux had discovered, killed, and scalped him. “The Penitent of Cross Village” ends happily when a Chippewa fisherman discovers that his partner is not lying drowned at the bottom of St. Mary’s River, where he thought he had left him after a drunken quarrel, but is still alive and able to marry his wife’s cousin. Some stories in The Chase of Saint-Castin and Other Stories of the French in the New World (1894) further portray the French in the St. Lawrence River and Great Lakes regions. by Kenneth A. Robb (2000)

The Chase of Saint-Castin, and Other Stories…(1894)