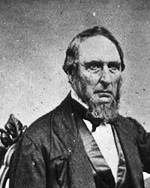 CHASE, OWEN (1796-1869). Author of Narrative of the Shipwreck of the Whale-Ship Essex, of Nantucket (1821), Owen Chase was first mate of the Essex when it was stove and sunk by a whale in the Pacific Ocean, 20 November 1820. The unprecedented whale attack and the three-month survival at sea of some of the crew made the event a legend. In Chapter 45 of Moby-Dick Herman Melville says that he saw Owen Chase (apparently a faulty recollection on Melville’s part), met Owen’s son at sea, and read a copy of the Narrative borrowed from Owen’s son. The Narrative is the main dramatic source for the ending of Moby-Dick.

A native of Nantucket, Chase was one of five brothers to serve as whaling captains. His first ship after the Essex was the Winslow in 1825, and his next command the Charles Carroll. Chase was married four times and is buried on Nantucket next to three of his wives.

Narrative of the Shipwreck of the Whale-Ship Essex, of Nantucket (1821)