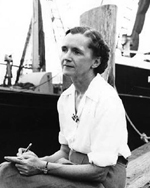 CARSON, RACHEL [LOUISE] (1907-1964). Though Rachel Carson’s fame as an environmental writer rests on the warnings about pesticide pollution in her last book, Silent Spring (1962), her previous three books on the sea established her reputation. Under the Sea Wind: A Naturalist’s Picture of Ocean Life (1941), The Sea Around Us (1951), and The Edge of the Sea (1955) offer an enduring picture of the ocean and its inhabitants, presented by a writer who not only understood the science involved but could also express research findings in exquisite prose. Carson’s work revealed the current state of scientific knowledge while at the same time conveying her own sense of the wonder and the majesty of her subject.

Born into a rural setting outside Pittsburgh, she showed an early aptitude for writing and entered what is now Chatham College, planning to major in English, but she shifted to biology and attended the Marine Biological Laboratory at Woods Hole, Massachusetts, in 1929. Writing a thesis on catfish, she earned an M.S. degree in zoology from Johns Hopkins University and in 1935 was hired by the government agency that later became the U.S. Fish and Wildlife Service, rising eventually to the position of biologist and editor in chief of the service’s publications.

Under the Sea Wind uses the point of view of marine creatures, notably a seabird, a mackerel, and an eel, to present a broad picture of ocean life. Though the book was well-received by critics, not until The Sea around Us ten years later did Carson attain wide recognition. The Sea Around Us encapsulated geology, physical oceanography, and the history of human interactions with the ocean in Carson’s characteristic visionary prose. It was a runaway success, winning major awards and becoming the basis of a feature film of the same title (1953).

The success of The Sea Around Us enabled Carson to leave the Fish and Wildlife Service and build a cottage overlooking the sea in Maine, where she spent summers exploring coastal tide pools. The Edge of the Sea covered the rocky coasts, beaches, and reefs of the Atlantic coast and was, like its predecessor four years earlier, a best-seller. It was a tribute to Carson’s vision and prose style that she could manage to create enthusiasm in the general public with a book that is essentially a nature guide to coastal ecology. One of her great gifts to American literature was the demonstration that there is no necessary conflict between art and science: her roles as author, scientist, and environmental activist reciprocated and supported one another. The 1961 revision of The Sea Around Us incorporated new scientific findings and sounded a warning about the dumping of nuclear wastes in the oceans.

In 1962 Carson published the work for which she is currently most famous, Silent Spring, which alerted the public to the poisonous dangers of uncontrolled pesticide use. Savagely attacked by chemical companies and other critics and already severely ill with the cancer that would eventually kill her, Carson fought for pesticide regulation until her death, continuing her speaking engagements and correspondence.

Though the historic importance of Silent Spring as an early environmental warning continues to overshadow Carson’s books on the oceans and sea life, her presentation of lucid scientific knowledge informed by a lyrical vision has continued to attract appreciative readers. As she pointed out in her acceptance speech for the National Book Award in 1952: “If there is poetry in my book about the sea, it is not because I deliberately put it there, but because no one could write truthfully about the sea and leave out the poetry.”

Under the Sea Wind: A Naturalist’s Picture of Ocean Life (1941)

“The Ocean and the Hungry World,” unpublished chapter from The Sea Around Us (ms)

Rachel Carson Speaking to the National Women’s Press Club in 1962:

Laura Knoy Reading excerpts from The Sea Around Us (1951):

Gary Kroll, “Rachel Carson’s The Sea Around Us: The Construction of Oceancentrism,” America’s Ocean Wilderness: A Cultural History of Twentieth-Century Exploration. U. Press of Kansas, 2008, 95-123.

The Life and Legacy of Rachel Carson
RachelCarson.org

2015 Film Project on Rachel Carson (Trailer)
Power of One Voice

1953 Documentary by Irwin Allen based on Rachel Carson’s The Sea Around Us (Scene):

This entry was posted in C and tagged 20th Century, audio, Science/Nature, video. Bookmark the permalink.