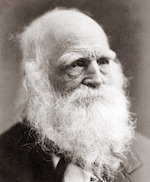 BRYANT, WILLIAM CULLEN (1794-1878). William Cullen Bryant was born and raised in the back country of western Massachusetts, where an early talent for versifying displayed in religious, sentimental, and satiric poems culminated in the publication in the North American Review of his best-known poem, “Thanatopsis” (1817). Thereafter, editions of his poems appeared regularly, and he soon became America’s first internationally prominent poet. He moved to New York in 1825, joined the New York Evening Post in 1827, first as associate editor and, two years later, as editor-in-chief and part-owner, remaining in that position for the rest of his life. Although he continued to write poetry until the year of his death, his position with the Evening Post involved him increasingly in social causes such as abolition, workers’ rights, and free trade, and his poetic output declined after the early 1840s.

Bryant’s five ocean voyages to Europe and the Near East, as well as several trips to South America, gave him considerable firsthand experience of the sea. Fugitive references to the discomforts and potential perils of sea voyaging appear in his accounts Letters of a Traveller (1850, 1859) and Letters from the East (1869). In one of his sea poems, “A Day Dream” (1860), inspired by his travels abroad, the narrator bemoans the decline of myth in a rational age as he looks out from the shores of Naples at the fading image of sea nymphs, only occasionally evoked by the poets of his time.

Other poems explore the sea metaphorically. The vast expanse of billowing grasses that he saw on a trip to Illinois in 1832 is compared to a motionless sea in “The Prairies” (1833). In “A Hymn of the Sea” (1842), the immense power of the sea in both its creative and destructive manifestations becomes an emblem of divine power. In “The Tides” (1860), the upward motion of the rising tide is a metaphor for human spiritual aspiration. Herman Melville, Nathaniel Hawthorne, and Oliver Wendell Holmes listened to Cornelius Matthews read Bryant’s “Monument Mountain” (1824) at the top of that mountain on the occasion of a famous literary picnic on 5 August 1850.

Bryant’s most significant sea poem–more than 500 lines long–is a fanciful tale titled “Sella” (1862). In the poem, the maiden Sella, thwarted by gender boundaries that restrict her ability to explore distant lands, finds a pair of magical slippers that transport her to the depths of the sea, where she returns repeatedly to investigate its mysteries until her brothers throw the slippers away. Although devastated by this loss, she spends the rest of her life teaching people how to harness the power of water. Bryant’s blank verse translations of the Iliad and the Odyssey (1870-1872) were well received in his time.

Letters of a Traveller; or, Notes of Things Seen in Europe and America (1851)

This entry was posted in B and tagged 19th Century, Exploration, Journalism, Passenger Travel, Poetry. Bookmark the permalink.