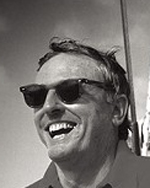 BUCKLEY, WILLIAM F[RANK]., Jr. (1925-2008). William F. Buckley Jr., prolific journalist, author, and editor of National Review, is also a passionate sailor. Those two worlds join in a trilogy of narratives about monthlong ocean cruises he has taken in yachts he either owned or chartered: Airborne: A Sentimental Journey (1970), Atlantic High: A Celebration (1982), and Racing through Paradise: A Pacific Passage (1987). There is plenty of nautical substance in these volumes for serious blue-water sailors as well as for general readers, if they can tolerate or ignore the parenthetical namedropping of celebrities, most of which is not essential to the fabric of the voyages.

In the first volume, Buckley attempts to demystify ocean sailing for his uninitiated readers by including long sections on mechanical problems and celestial navigation. The narrative is replete with accounts of failures of gear and near disasters, both past and present, so much so that it is difficult to imagine such an experienced sailor getting into that many scrapes with boats. The second volume, like the first, begins with a series of digressions–cruises to Mexico and the Fiji Islands–before it eventually addresses crossing the Atlantic; the passage is uneventful, apart from some hard slogging on the final leg from the Azores to Spain. The third volume sets aside the digressive voyages taken in the interval between books into a separate section, continues the detailed analysis of navigational gear, and follows the Buckley practice of excerpting from his crew’s journals. The voyage is again uneventful, but a chatty and sometimes witty style as well as magnificent photographs propel the reading.

Buckley wrote the foreward to Titanic Adventure: One Woman’s True Life Voyage Down to the Legendary Ocean Liner (1999) by Jennifer Carter and Joel Hirschhorn, a book about the 1987 French/American diving expedition to the wreck.

Racing through Paradise: A Pacific Passage (1987)