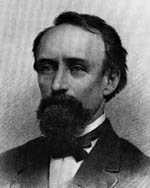 BROWNE, JOHN ROSS (1821-1875). Author of Etchings of a Whaling Cruise (1846), J. Ross Browne was born in Beggars Bush, Ireland, and emigrated to America when he was twelve years old. In 1838 Browne journeyed on a trading boat from Louisville to New Orleans. Lacking funds to take a grand European tour, he shipped out of New Bedford, Massachusetts, in July 1842 as a common sailor on a whaler. Unhappy with shipboard conditions and the captain’s cruelty, he negotiated his release from duty and stayed in Zanzibar until he secured a berth on a brig, which arrived in Salem harbor on 19 November 1843.

Etchings of a Whaling Cruise is Browne’s autobiographical account of those travels. Herman Melville, one of Browne’s reviewers, praised the graphic, authentic writing and incorporated some of the details into Moby-Dick (1851). An effective antidote to romantic notions of seafaring, Etchings not only describes vividly the implements and process of whaling but also exposes the cruelty of some nineteenth-century sea captains. Browne states, for example, that the forecastle is much filthier than pigsties in Kentucky. While the captain and officers dine royally, he has learned to settle for hard biscuits, greasy pork, and fat, mutilated cockroaches in his molasses. Browne attacks the captain for requiring hard labor from desperately ill sailors and condemns the inhumane practice of flogging. He concludes that the system is authoritarian and tyrannical.

Browne’s Etchings of a Whaling Cruise has been compared with Richard Henry Dana’s Two Years before the Mast (1840). In the introduction to Etchings, Browne acknowledges his indebtedness to Dana for realistic descriptions of shipboard life. by Sally C. Hoople (2000)

This entry was posted in B and tagged 19th Century, First-person narrative, Passenger Travel, Whaling/Sealing. Bookmark the permalink.