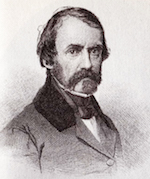 BRIGGS, CHARLES FREDERICK (1804-1877). Born a Nantucket Yankee (his mother was a Coffin), Charles Frederick Briggs was a real sailor before he became a professional writer. Though he would later turn to the magazines to earn a living, Briggs began his career as a sea novelist. The Adventures of Harry Franco, a Tale of the Great Panic (1839) is the tale of a boy from Albany, New York, who goes to sea as a green hand when his family falls on hard times. This novel, both successful and influential, was followed by The Haunted Merchant (1843), the story of a New York merchant who goes bankrupt, and by Working a Passage: or Life in a Liner (1844), another picaresque adventure by “Harry Franco,” telling of a young man’s voyage to Liverpool.

In 1846 Briggs posed as Fernando Mendez Pinto in a series of letters for the New York Evening Mirror, satirizing literary humbug and affectation. In The Trippings of Tom Pepper, or the Results of Romancing, again by “Harry Franco” (2 vols., 1847-1850), Briggs used an urban backdrop to lampoon the New York literati, notably Edgar Allan Poe, who had coedited the Broadway Journal with Briggs in 1845. Starting in 1848, Briggs edited Holden’s Dollar Magazine, in the 1850s, as editor of Putnam’s Monthly Magazine; he solicited and published the short fiction of Herman Melville. In the early 1860s, between various other editing jobs, Briggs worked at the New York Customs House. Seaweeds from the Shores of Nantucket (1853) is a volume of miscellaneous short pieces celebrating the island of Briggs’ birth. In The Raven and the Whale (1956), Perry Miller places Briggs in the New York scene and explores parallels between Briggs and Melville.

The Adventures of Harry Franco, a Tale of Great Panic (1839)

Seaweeds from the Shores of Nantucket (1853)

This entry was posted in B and tagged 19th Century, Atlantic Ocean, Fiction, Journalism, Recreation, Short Story. Bookmark the permalink.