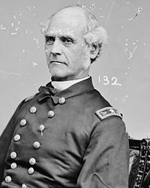 BRIDGE, HORATIO (1806-1893). A naval officer, Horatio Bridge is most famous for his close friendship with Nathaniel Hawthorne, for whom he found a publisher for Twice-told Tales (1837) and to whom Hawthorne dedicated The Snow Image (1851). Born in Augusta, Maine, Bridge graduated from Bowdoin College in 1825 with Hawthorne. Upon graduation, Bridge attended Northampton Law School and practiced law for several years. After being financially ruined in a dam-building project on the Kennebec River, he joined the navy as a paymaster in 1838.

His first cruise was under the command of Commander John Percival, in the sloop of war U.S.S. Cyaneon her maiden voyage to the Mediterranean in 1838-1841. After a period ashore, he was assigned in 1843-1844 to the newly built sloop of war U.S.S. Saratoga, under Commander Josiah Tatnall. Serving with the Africa Squadron under Commodore Matthew Calbraith Perry, Saratoga was one of three ships protecting American citizens and commerce, while suppressing the slave trade on the west coast of Africa. During this voyage, Bridge kept a detailed account, which Hawthorne edited for him as Journal of an African Cruiser (1845, 1853).

After serving a year at the Portsmouth Navy Yard, Bridge returned to the Mediterranean and the West African coast in 1846-1849 as paymaster of the frigate U.S.S. United States, flagship of Commodore George Read. From 1849 to 1851 he served again at Portsmouth before returning to sea in the sloop of war U.S.S. Portsmouth on the Pacific Station. Ordered to Washington in 1854, he became chief of the Bureau of Provisions and Clothing and was in charge during the period when the navy expanded sevenfold during the Civil War. In 1869 he became chief inspector of provisions and clothing until retirement in 1873. Bridge lived until his death in Athens, Pennsylvania, where in 1892 he wrote his Personal Recollections of Nathaniel Hawthorne.