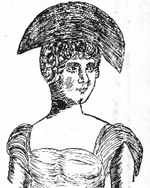 “BREWER, LUCY.” Lucy Brewer is the pseudonym of either Nathaniel Coverly Jr. (1775?-1824), an early nineteenth-century Boston broadside and pamphlet publisher, or a writer in his employ, Nathaniel Hill Wright (1787-1824). Brewer’s The Adventures of Louisa Baker (1815) is purportedly a “true” tale of Brewer/Baker’s seduction, pregnancy, abandonment, life of prostitution, escape in sailor disguise, and service aboard the frigate U.S.S. Constitution.

Between 1815 and 1818, the story went through nineteen editions, including two sequels. Better known as The Female Marine, Brewer/Baker’s tale of her heroic service as a marine aboard Constitution in the War of 1812 went unchallenged into the twentieth century. The battle descriptions, however, are nearly verbatim accounts culled from contemporary newspapers, and the alias “George Baker” that Louisa adopted appears nowhere on Constitution muster rolls.

This entry was posted in B and tagged 19th Century, Navy/Coast Guard, War. Bookmark the permalink.