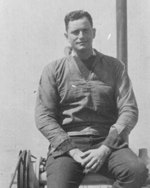 BESTON [SHEAHAN], HENRY (1888-1968). Born Henry Boston Sheahan in Quincy, Massachusetts, Henry Beston is the author of about a dozen books, including The Outermost House. A Year of Life on the Great Beach of Cape Cod (1928). In 1925 Beston built a two-room cottage on the dunes in Eastham about twenty feet from the high-water mark. In September 1926 he went for a brief visit but decided to stay for the year, remaining until the end of the following summer. His account of the experience includes descriptions of shipwrecks along the Cape Cod coast in the worst winter in fifty years and of his interactions with his closest neighbors, the coastguardsmen stationed a mile away. But the work is especially notable for its commentary on the natural environment–permanently displaying, Boston emphasizes, a primeval beauty, harmony, and mystery amid the continual seasonal changes in such things as the texture and colors of the sea and the sand and the life forms of the sea, the sky, and the land. Beston’s close observation of the natural world, his preoccupation with the human connection to the sea environment, and his organization of the book according to the cycle of the seasons have led many to compare it to Henry David Thoreau’s Walden (1854). Declared a national literary landmark in 1954, the house itself was swept out to sea during the blizzard of February 1978. Beston spent the last four decades of his life on a farm in Nobleboro, Maine, where he continued to write. Among his later publications, White Pines and Blue Water (1950) includes observations on the seacoast of Maine.

The Outermost House: A Year of Life on the Great Beach of Cape Cod (1928)

This entry was posted in B and tagged 20th Century, Coastal Life, First-person narrative, Science/Nature. Bookmark the permalink.