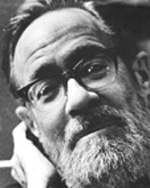 BERRYMAN, JOHN (1914-1972). Born John Smith in Oklahoma, John Berryman assumed the name of his stepfather after his own father committed suicide. Berryman’s best-known work is the poetic sequence of 77 Dream Songs, published in 1964, for which he won the Pulitzer Prize. His Toy, His Dream, His Rest (1968) continued the Dream Songs and won the National Book Award and a share of the Bollingen Prize for Poetry in 1969. These poems exemplify Berryman’s characteristic use of a persona or alter ego to explore the concerns with guilt and death that inform much of his work. That work is often overtly Freudian in its allusions and consistently rooted in the illusion and depression that colored much of the poet’s own life.

Berryman has scant credentials as a poet of the sea; the only recurrent marine reference in his poetry is his preoccupation with suicide by drowning. See, for example, the last stanza of “Henry’s Understanding” in the “Scherzo” section of Delusions, Etc. (1972). Berryman committed suicide in 1972 in Minneapolis by jumping off a bridge into the Mississippi River. by Thomas R. Brooks (2000)

This entry was posted in B and tagged 20th Century, Poetry. Bookmark the permalink.