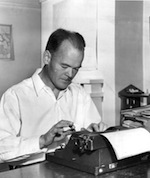 BINNS, ARCHIE [FRED] (1899-1971). Archie Binns, novelist and historian of the northwestern United States, is best known for his critically acclaimed novel Lightship (1934). Based partly on Binns’ own experiences at age eighteen aboard the Umatilla Reef Lightship off Cape Flattery, Washington, the story brings together the diverse lives of nine sailors as they struggle to save the ship, which has broken loose from its moorings in a deadly storm.

Binns was born and raised in the Puget Sound area to a family steeped in seafaring: his mother was born outside New York aboard a ship that her father commanded, and Binns’ grandfather, who died at sea when he was thirty-one, was renowned as a cotton blockade runner during the Civil War. After serving nine months aboard the Umatilla, Binns spent six years alternating college studies ashore with seafaring abroad, including voyages throughout the Atlantic, Pacific, and Indian Oceans as well as the Arabian Sea and rivers within India. He then worked as a journalist in New York for several years before publishing his first novel, The Maiden Voyage (1931), a collaborative effort with Felix Riesenberg.

In his prolific career, Binns wrote several novels centered around the Pacific Northwest and set against the backdrop of the Puget Sound wilderness, including Backwater Voyage (1936), Mighty Mountain (1940), You Rolling River (1947), and The Headwaters (1957). He completed several historical and scholarly studies of the northwestern coastal regions, including Northwest Gateway (1941), The Roaring Land (1942), and Sea in the Forest (1953). Binns also wrote several successful juvenile works based on sailing adventures, including The Secret of the Sleeping River (1952), Sea Pup (1954), and Enchanted Islands (1956). He died in Sequim, Washington, near the coastal wilderness he had chronicled throughout his life.