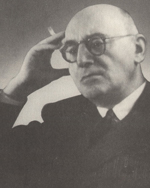 BEHRMAN, S[AMUEL]. N[ATHANIEL]. (1893-1973). The prolific playwright S. N. Behrman was born in Worcester, Massachusetts, into dire poverty; his entry into professional theatre was rapid, and by the mid-1920s he was already a notable literary figure. He remained a significant presence in the American theatre until the early 1960s; some of his important efforts use the sea in significant ways.

Behrman wrote the dialogue for the 1930 film adaptation of Jack London’s The Sea-Wolf . Behrman also wrote The Pirate (first perf. 1942; pub. 1943), a melodrama of romance and intrigue, which he freely adapted from Die Seerauber, an obscure German melodrama of the 1890s written by playwright and producer Ludwig Fulda. Set in a small village on an unnamed West Indian island, The Pirate dramatizes the truth and illusion in the legend of Estramudo, the “Robin Hood of the Seas.” Manuela, marooned in a loveless marriage, dreams of the legendary hero, only to discover, with the help of a rogue posing as Estramudo, that he is, in fact, both her husband and the rogue. In this play, which mixes carnivalesque elements and songs, the Gulf Stream casts an enchanting spell on the island’s inhabitants, while the far-off ocean represents the expansiveness of desire and the duplicitous nature of truth and illusion at the core of the romance genre.

Behrman also coauthored with Joshua Logan the book for the Broadway musical Fanny (first perf. and pub. 1954) based on the “Cesar Trilogy” of films by Marcel Pagnol (Marius, 1931; Fanny, 1933; Cesaq 1936). The musical, with music and lyrics by Harold Rome, follows the fortunes of two families in the port of Marseilles. Marius impregnates Fanny and then takes off on a long voyage. The elderly and wealthy sailmaker Panisse marries Fanny and claims the child as his own. The story comes to a bittersweet “Gallic” ending when Marius returns, and Panisse, on his deathbed, urges Fanny to marry her true love. The production features evocative seaside locations and a square-rigger traversing the stage under full sail.

This entry was posted in B and tagged 20th Century, Caribbean, Island Life, Multimedia/Multimodal, Plays. Bookmark the permalink.