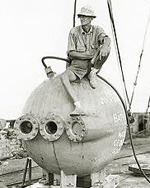 BEEBE, WILLIAM [CHARLES] (1877-1962). William Beebe was born in Brooklyn and attended Columbia University, where he earned his B.S. in 1898. He led more than sixty scientific expeditions, many of them intentionally maritime. Influenced especially by the writings of Jules Verne, Rudyard Kipling, and H. G. Wells, he participated in the development of the bathysphere and was a pioneer in both shallow and deep-sea diving.

More than a scientist, Beebe published a series of narratives marked by literary and illustrative elegance, capturing the pattern and color of undersea fauna in the design of books such as Galapagos: World’s End (1924) and The Arcturus Adventure (1926). Later works include Beneath Tropic Seas (1928), Nonsuch: Land of Water (1934), and Half Mile Down (1934). He was widely read in the previous literature of science and the sea, from the touted Charles Darwin, to the neglected (for the time) Herman Melville.

Curator of ornithology at the New York Zoological Society, Beebe spent much of his later life at his field station in Trinidad, where he died. by R. D. Madison (2000)

This entry was posted in B and tagged 20th Century, Nonfiction, Science/Nature. Bookmark the permalink.