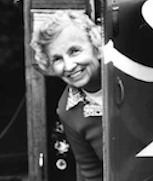 JOHNSON, ELECTA [EXY] SEARCH (1909-2004). Exy Johnson was born in Rochester, New York, in 1909. She attended Smith College, graduating after three years in 1929, and went on to the University of California, Berkeley, for a year of study in French. In 1932 Exy sailed from Le Havre, France, to Boston on the Wander Bird, captained by the husband of her college friend. On the Wander Bird Exy met her future husband, Irving Johnson, who sailed as a mate. In 1933 Exy and Irving began the first of their seven round-the-world cruises with young, novice crews aboard the schooner Yankee. The Johnsons’ younger son, Robert, said in a 2014 interview that his parents balanced each other, and neither could do what they did without the other. Though Exy had limited sailing experience, she loved being at sea. Exy’s language skills were an asset in foreign ports where she helped negotiate with customs officials and shopped at local markets to restock Yankee’s supply of fresh produce and meat. She also raised her two sons Arthur and Robert on board Yankee; each boy took his first cruise when he was just over one year old and later Exy instructed them using the Calvert Correspondence School curriculum.

Exy wrote articles for a Rochester, New York, newspaper The Times Union about her Atlantic crossing on the Wander Bird, and she continued her journalistic work aboard Yankee, writing articles about their travels as varied as “Housekeeping Afloat” and “Political Transitions in American Samoa.”

To write collaboratively with Irving about the Yankee voyages, Exy took dictation from Irving in shorthand, which she later edited and prepared for their longer articles and books. Westward Bound on the Schooner Yankee (1936), Yankee’s Wander World: Circling the Globe in the Brigantine Yankee (1949), Yankee Sails Across Europe (1962), and Yankee Sails the Nile (1966) are written from Exy’s perspective with occasional accounts or lengthy quotations given by Irving. Sailing to See: A Picture Cruise on the Schooner Yankee (1939) is written from Irving’s perspective except for two chapters, “Refuge on Pitcairn” and “The Yankee Baby,” which Exy wrote in the first person. Yankee’s People and Places (1955) is written by Irving and Exy Johnson, as well as Lydia Edes, a crewmember. This book is written primarily from Exy’s perspective, though a significant number of passages are from Lydia, differentiated from Exy’s sections by italics. The Johnsons also wrote ten articles together for National Geographic between 1942-1969, sharing the byline as they did with their books, in addition to several other articles for various magazines and newspapers, some of which were translated into other languages.

Irving and Exy essentially conducted longitudinal studies of their perennial ports-of-call, especially in the South Pacific where they had close friends. While Irving’s narrative style is more technical, Exy focuses on the people and cultures Yankee encounters. The Johnsons’ books are filled with exciting stories of adventure and travel, but Exy also seems aware of her role in documenting places that are bound to change irrevocably. She seems fascinated by the history and geography of each port Yankee visits and uses her interactions with shopkeepers and vendors as a way to better understand the foreign culture. She wrote in Yankee Sails Across Europe that “sometimes marketing interferes with many other things I want to do, but more often it leads to pleasant experiences and contacts that others miss.” Exy is especially interested in the women she meets, relying on them as role models who face similar challenges in their remote, isolated environments to those she faces on Yankee. Exy writes in Yankee’s Wander World: “Mrs. Wittmer [of Floreana Island] and I were really old friends, though the actual hours we had spent together could easily be counted. In remote places those hours count more than they do in cities.”

Exy advocated for the values the Yankee voyages represented long after she and Irving took their last world cruise. Exy developed a particularly strong relationship with friends on Pitcairn Island, which led to her supporting the publication of A Doctor’s Letters From Pitcairn 1937. The book is a collection of letters written by Dr. Rufus “Brick” Southworth, who served as doctor on Yankee during the first world cruise and returned to Pitcairn in 1937 as a medical instructor. Exy felt the letters captured the “old” Pitcairn Island. “The Pitcairn we knew was gone,” she wrote in her foreword. After she and Irving retired from cruising, Exy remained involved in sail training, serving on Sea Education Association’s board of trustees from 1992-2004. In 2003, the TopSail program in Los Angeles launched the twin brigantines Exy Johnson and Irving Johnson, and Exy christened the ship that bears her name.

This entry was posted in Articles, J and tagged 20th Century, Nonfiction. Bookmark the permalink.