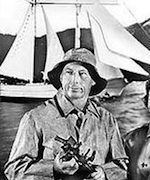 JOHNSON, IRVING [McCLURE] (1905-1991). Irving Johnson grew up on a farm in the Connecticut River valley of Massachusetts. Inspired by Jack London’s novels, he had an unswerving desire to go to sea and work with his hands. Johnson spent summers working aboard yachts along the New England coast. In 1929 he and his friend Charles Brodhead went to Germany and signed on board the four-masted bark Peking for an 11,000- mile voyage around Cape Horn to Chile. Johnson’s first book, Round the Horn in a Square-Rigger (1932), tells of the storm-beset trip. The book was later republished with an afterword entitled “Forty-Eight Years Later” as The Peking Battles Cape Horn (1977; with additions, 1995). Johnson lectured with film footage from the voyage for many years; the footage was made into the narrated film Around Cape Horn in 1980.

In 1930 Johnson sailed across the Atlantic on the Shamrock V, the fifth of the Shamrocks with which Sir Thomas Lipton had attempted to win the America’s Cup. It was a wild and stormy trip. Johnson returned home on the schooner Wander Bird, where he met his future wife, Electa Search (“Exy,” 1909-2004), who was sailing as a college friend of the captain’s wife. Johnson’s two crossings of the Atlantic are recorded in Shamrock V’s Wild Voyage Home (1933).

Irving and Exy Johnson dreamed of buying their own vessel and sailing around the world. In 1933 they bought a topsail schooner that they renamed Yankee. With a crew of young men and women, they made three eighteen-month voyages around the world; the first two voyages are narrated in Westward Bound in the Schooner Yankee (1936) and Sailing to See: Picture Cruise in the Schooner Yankee (1939). Perhaps the best of their books, Westward Bound expresses a sense of freshness and wonder because of the uniqueness and uncertainty of what the Johnsons were undertaking. Johnson joined the U.S. Navy in 1941 and spent three years during World War II aboard the survey ship Sumner, charting the islands and waters of the South Pacific. After the war, he and Exy bought an English prize of war, the last pilot schooner built by the Germans before steam took over. They rigged it as a brigantine, named it Yankee, and sailed it four times around the world. Yankee’s Wander World: Circling the Globe in the Brigantine Yankee (1949) describes the first of these voyages (called the “fourth” voyage). With Lydia Edes, the Johnsons wrote an account of the “sixth” voyage, Yankee’s People and Places (1955).

The Johnsons’ last vessel, the ketch Yankee, was designed with folding masts and an extrastrong keel so it could be taken through locks and into waters wracked by strong tides. Aboard this ketch, the Johnsons traversed Europe’s inland waterways many times and sailed up the Nile before the Aswan High Dam was built; Yankee Sails across Europe (1962) and Yankee Sails the Nile (1966) record their adventures.