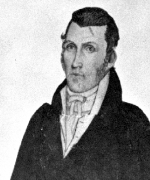 JEWITT, JOHN RODGERS (1783-1821). An Englishman who served aboard the American merchant vessel Boston, John Jewitt became famous as a “captive” of the Indians of Nootka Sound, off the coast of Vancouver Island, British Columbia, when he survived the destruction of his ship and massacre of its crew in 1803. Born in Boston, England, Jewitt apprenticed to his blacksmith father and signed aboard the Boston as armourer in 1802 at Kingston-upon-Hull, where the ship had stopped to obtain a cargo. When the ship arrived at Nootka Sound, Captain John Salter proved to be a less than sympathetic negotiator and offended the powerful chief Maquinna, who retaliated by murdering Salter and his crew. Jewitt, though badly injured, was spared because Maquinna appreciated his skills as a blacksmith; another man, sailmaker John Thompson, was spared when Jewitt claimed that Thompson was his father.

Until they were rescued by the Boston ship Lydia in 1805, Jewitt and Thompson lived among the indigenous people of Nootka Sound. Jewitt became a favorite of Maquinna, who arranged for his marriage with a high-ranking woman and for the sale among the local tribes of daggers and other items fashioned by Jewitt on the salvaged forge of the Boston. Jewitt kept a diary of terse entries during his captivity, which he published in 1807 as A Journal Kept at Nootka Sound. He subsequently met journalist Richard Alsop and, with his enthusiastic participation, enlarged the journal into A Narrative of the Adventures and Sufferings of John R. Jewitt; Only Survivor of the Crew of the Ship Boston, during a Captivity of Nearly 3 Years Among the Savages of Nootka Sound, with an Account of the Manners, Mode of Living, and Religious Opinions of the Natives (1815). After the publication of the Narrative, Jewitt spent the rest of his life playing the role of himself as captive, regularly singing his signature song, “The Poor Armourer Boy,” and even playing himself in a production of James Nelson Barker’s play The Armourer’s Escape (1817).

A Narrative of the Adventures and Sufferings of John R. Jewitt… (1815)