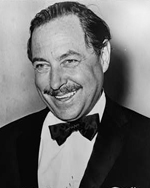 WILLIAMS, TENNESSEE [THOMAS LANIER] (1911-1983). Winner of four New York Drama Critics’ Circle Awards and two Pulitzer Prizes for his plays, Tennessee Williams is most identified with the American South. He was born in Mississippi and spent his early childhood there until the family settled in St. Louis in 1918. Although many of his plays are set in New Orleans or along the Mississippi Delta, his works range geographically from desert, to jungle, to mountain, and to sea.

Williams’ first transatlantic crossing was on the S.S. Homeric in 1928, accompanying his grandfather on a summer trip to Europe. A violent bout of seasickness clouded the first days of that voyage, but he was to make many pleasurable crossings after earning recognition on Broadway. Among the ships mentioned in his Memoirs (1975) are the Queen Mary, the Vulcania, the Andrea Doria, and the Ile de France. The early 1940s brought visits to Provincetown on Cape Cod, Acapulco, Key West, and Havana, all providing opportunities for his favorite recreation, swimming. Ultimately, he bought a house in Key West.

Williams’ first produced play was set in a seaport. This one-act, Cairo! Shanghai! Bombay! (first perf. 1935; not pub.), presented by amateurs in a residential garden in Memphis, where he was spending a summer with his grandparents, shows funny and touching interactions between sailors and ladies of the night. Sailors are mentioned or appear as minor characters in a number of Williams’ plays, often evoking a sense of rootlessness and/or erotic activity. Tom, the character whose memories reconstruct the action of The Glass Menagerie (first perf. 1944; pub. 1945; film adaptations 1950, 1987, 1993; television 1966, 1973), has abandoned his mother and sister to become a “merchant sailor.” In The Rose Tattoo (first perf. 1950; pub. 1950; film adaptation 1955), the teenaged Rosa falls for a sailor named Jack, who has just come home on leave after three months at sea; Rosa’s mother particularly objects to the tightness of Jack’s navy pants. The opportunistic drifter Chance Wayne in Sweet Bird of Youth (first perf. 1959; pub. 1959; film adaptation 1962, 1987; television 1989) mentions that he went into the navy because that was the uniform that looked best on him. Sailors carouse in a bar in the screenplay One Arm (first perf. 1948; pub. 1954), and a yacht is used for filming a pornographic movie. Violet of Small Craft Warnings (first pert 1972; pub. 1972) is drawn to “drunk sailor boys.” In Williams’ most directly autobiographical play, Something Cloudy, Something Clear (first perf. 1981; pub. 1995), the character of the author (named August) has two homosexual encounters with a drunken merchant seaman.

Among the authors admired by Williams, Hart Crane exerted an influence related to the sea. Hart Crane and his mother appear as the two characters in the one-act Steps Must Be Gentle (first perf. 1980; not pub.), speaking to each other in a “hypothetical communication” fifteen years after the poet’s death. Tormented by his mother’s inability to countenance his homosexuality and making a choice to “rest at the floor of the sea,” Crane had leaped to his death from the deck of the steamship Orizaba about twelve hours north of Havana. According to his Memoirs, Williams specified in his will that he be buried at sea near the probable site of Crane’s bones. His language in that passage bears striking similarities to that of Blanche DuBois in the final scene of A Streetcar Named Desire (first perf. 1947; pub. 1949; film adaptation 1951, 1997; television 1984, 1995, 1998), when she fantasizes about death on the ocean and burial at sea. A similar, though pared-down, version of ocean burial is recounted in The Night of the Iguana (first perf. 1961; pub. 1969; film adaptations 1964, 2000) when the Costa Verde hotel proprietor Maxine tells how her husband, Fred, had been dropped in the sea, as he requested on his deathbed. In the same play, Shannon’s notion of suicide is to take “the long swim to China.” In Sweet Bird of Youth, a last resort for Chance Wayne also would be to swim out until sharks and barracudas take him for live bait.

The sea is crucial to the action or atmosphere of several plays. One of the most vivid passages in Suddenly Last Summer (first perf. 1958; pub; 1958; film adaptation 1959; television 1993) is Mrs. Venable’s recollection of her voyage with her son Sebastian on a four-masted schooner to the Galapagos (called the Encantadas), inspired by the sketches of Herman Melville, where they watch newly-hatched sea turtles make their desperate dash across the sand to the sea while attacked by flesh-eating birds. In Catherine’s account of her last moments with Sebastian, she wants to go toward the sea for safety, to the waterfront and docks where a taxi might be found, but Sebastian makes the fatal mistake of heading uphill away from the sea, only to be attacked by a birdlike flock of cannibalistic children.

Sweet Bird of Youth is set in a Gulf Coast hotel overlooking a vast stretch of water. Chance Wayne has come “back to the sea” as a kind of refuge and remembrance of a lost youth when he and his girlfriend used to find privacy on Diamond Key, an offshore sandbar that would be inundated at high tide. Minnie’s yacht, on the other hand, serves as a mecca of depravity. In The Night of the Iguana, the lure of the still-water beach below the hotel motivates the exits and entrances of various characters who go, and return from, swimming. Most importantly, the nonagenarian Nonno makes it clear that he is urgently drawn to the sea, which he calls “the cradle of life.” If life began in the sea, as he claims, then his death near the sea at the end of the play suggests the centrality of the sea in the circular process of life. In The Milk Train Doesn’t Stop Here Anymore (first perf. 1964; pub. 1964), the so-called Angel of Death Christopher Flanders also refers to the sea as the cradle of life, as well as of civilizations. The play is set in a villa that is supposedly inaccessible except by water, on “the oldest sea in the Western world,” the Mediterranean.

Williams often used sea sounds for theatrical effect. Sea or gulf winds blow through many of the hitherto mentioned plays as well as Summer and Smoke (first perf. 1947; pub. 1964; film adaptation 1961; television 1972). The boom of the surf punctuates the action in The Milk Train Doesn’t Stop Here Anymore and Something Cloudy, Something Clear. Small Craft Warnings, set in a bar above “the Pacific, the world’s greatest ocean,” employs both the wind and the boom. Fish-eating seabirds flap and swoosh over the scene throughout the one-act The Gnadiges Fraulein (first perf. 1966; pub. 1967), which is set on Cacaloony Key and calls for a color scheme emphasizing the grayish white color of pelicans. The one-act Lifeboat Drill (first pert 1981; not pub.) is set in a first-class stateroom aboard the Queen Elizabeth II.

Other plays contain at least passing references to the sea. In Camino Real (first perf. 1953; pub. 1953; film adaptation 1964), the plaza of a surrealistic tropical seaport is dominated by the luxury hotel Siete Mares (Seven Seas) and the fleabag Ritz Men Only; the proprietor of the latter stands in the doorway and metaphorically hawks a vacancy as “a little white ship to sail the dangerous night in.” In The Two-Character Play (first perf. 1975; pub. 1969), a brother and sister reminisce about swimming off the Gulf Coast that “connects with a sea” and that could itself be called a sea because of its gulls and tides. References to a yacht, deck, and northern lights evoke the sea in In the Bar of a Tokyo Hotel (first perf. 1969; pub. 1970). Ernest Hemingway appears in Clothes for a Summer Hotel (first pert 1980; pub. 1983) and talks about his story “Sea Change.” In The Notebook of Trifforin (first perf. 1981; pub. 1997), the sea is evoked indirectly in Nina’s recitation of Treplev’s monodrama and perhaps even in her last-act confession that she has given her child, a “sea gull” like herself, to a couple who took the baby to America.