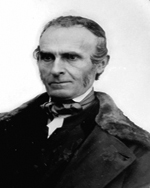 WHITTIER, JOHN GREENLEAF (1807-1892). A Quaker abolitionist and poet, John Greenleaf Whittier epitomizes the poet of rural life. With his New England contemporaries, however, he had little relish for straying far from the reach of the sea breeze. Sea motifs and imagery enter his earliest poetry from unexpected sources, such as Vikings in “The Norsemen” (1841) and Voyageurs in “The Bridal of Penacook” (1844). But even earlier than these he had written “The Slave-Ships” (1834), based on horror stories of the Middle Passage. “The Ship-Builders” (1846) reinforces Whittier’s contention that ships should be constructed only for moral purposes, specifically abjuring the opium and slave trades. “Skipper Ireson’s Ride” (1857), like most legendary material, gains power in proportion as it strays from history. “The Dead Ship of Harpswell” (1866), “The Palatine” (1867), and “The Three Bells” (1872) follow in the same folkloric vein: Whittier frequently wrote from oral sources without the constraint of formal history, a technique that drew criticism on more than one occasion. His late poems “The Bay of Seven Islands” (1882) and “To a Cape Ann Schooner” (1886) celebrate, respectively, Whittier’s “home” waters of Massachusetts and their craft, in this case a vessel named after Whittier himself.

This entry was posted in W and tagged 19th Century, Atlantic Ocean, Middle Passage and Enslavement, Poetry, Race/Ethnicity and the Sea. Bookmark the permalink.