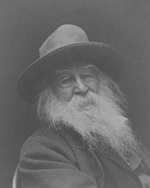 WHITMAN, WALT[ER] (1819-1892). Walt Whitman was born in West Hills, near Huntington on northwestern Long Island. With almost two centuries of ancestral residence on the island and some seafaring tradition in his family, Whitman was naturally attuned to the ocean and its related occupations. Not until 1848 did he venture for any extended period of time beyond the islands now constituting New York City. Even then, his short stay that year in New Orleans placed him on the Mississippi River and the Gulf of Mexico. Whitman returned to New York in the same year, via the Mississippi River, the Great Lakes, and the Hudson River. On his return, he remained in and around Brooklyn for several years.

Publication of early editions of Whitman’s repeatedly revised life’s work, Leaves of Grass (1855 through 1891-1892), his positions as writer and newspaper editor, and his building ventures provided some money and opportunities for more travel. He visited Ralph Waldo Emerson in Boston and stayed for extended periods in Civil War camps with his brother George. During the Civil War, Whitman held government clerkships in Washington, D.C., so he could nurse sick and wounded Civil War soldiers. In early 1865 he was discharged from one federal government position for the purported obscenity of some of his writings, but intervention by supporters led to his transfer to another government position. Heat prostration in 1872 and a paralytic condition in 1873 led Whitman to move to his brother’s home in Camden, New Jersey. From that time until his death, Camden would remain Whitman’s point of return.

From his earliest days, Whitman knew, loved, and lived in close proximity to the sea, the shore, and their related activities. He wrote of these throughout a literary career that spanned five decades. One cannot read many pages of Whitman’s poetry or prose without encountering references to the sea and those who sail it. In some instances, these references are direct and literal; in others, they allow Whitman to advance larger concepts. “Mannahatta” (1860, 1881) describes the sea-borne life and economy of Manhattan Island. “Song of Joys” (1860, 1881) devotes pages to describing lobstering, mackerel fishing, boating, and whaling. “Salut au Monde” (1856, 1881) has a half-page catalog of “the sail and steamships of the world.” However, not all Whitman’s literary references to the sea are celebratory. The 1855 edition of Leaves of Grass includes an extended narration on a strong swimmer in the ocean, rammed by eddies into the rocky shore, bloodied, battered, drowned, and ultimately carried off by the tide.

Whitman’s poetry also portrays American sea history, fostering new myths of heroism for American democracy. For example, “Song of Myself” (1855, 1881) narrates John Paul Jones’ signal naval victory over the British Serapis during the American Revolution; the Americans engaged and victoriously boarded the British Serapis from their own sinking vessel, the Bonhomme Richard. This poem also details the heroic rescue of passengers aboard the drifting and rudderless steamship the San Francisco, en route from New York on 23-24 December 1853; the rescuing captain tacks relentlessly for days to stay with the foundering ship and chalks a message to its passengers, making clear his determination to save them.

Whitman’s funeral ode for Abraham Lincoln, “O Captain! My Captain!” (1865-1866, 1881) mingles nautical imagery with allusions to the victory of Admiral Nelson’s British fleet over Napoleon’s larger French and Spanish fleet off Trafalgar, Spain, on 21 October 1805. Whitman’s poem represents Lincoln as saving the Union in the same selfless way that Horatio Nelson secures control of the sea for Britain, rendering sea-borne invasion impossible. Both national heroes die pursuing their victories. Although no direct reference to Nelson is made, the parallels are unmistakable.

Sea and seashore references also describe Whitman’s personal and poetic biography. “Starting from Paumanok” (1860, 1881) provides an idealized version of the poet’s past, while in “Out of the Cradle Endlessly Rocking” (1859, 1881-1882) the sea and its tides, two birds, and a tale of life and death relate Whitman’s awakening pact with an integrated vision of his poetic destiny as a singer of both life’s pains and joys. Whitman’s poem “Facing West from California’s Shores” (1860, 1867) uses a classical vision of the western seas to suggest his own impending death. “Old Age’s Ship and Crafty Death’s” (1890, 1891-1892) parallels Alfred Tennyson’s poem “Ulysses” (1842) in its determination to continue the good fight in the face of advancing age and declining resources.

Much more important, however, are Whitman’s poems that use references to physical seas to advance larger concepts. Whitman portrays land as the realm of apparent certainty and stasis, while he presents oceans as reflecting the reality of uncertain outcomes, ongoing change, and the unremitting ebb and flow of manifold and often apparently conflicting universal forces. On that basis, sea voyages and voyagers in Whitman’s poetry are readily associated with reality, aspiration, adventure, and heroism. Similarly, in poems such as “In Cabin’d Ships at Sea” (1871), Whitman compares his poetry in Leaves of Grass to the voyage of a sailing ship. His poems attempt to capture the realities of both sea and shore, poetically reflecting their multifaceted rhythms, tones, and ever-changing forces. On that basis, he hopes sailors’ experiences will attune them to his poetry’s worldview as well as its undulations, pulsations, and “liquid flowing syllables.” Whitman broadens this comparison in the poems constituting “Fancies at Navesink” (1885, 1888- 1889). There, he associates life with poetic aspirations and despairs, ships, voyages, ebbing and rising tides, the undulations of waves, and God’s plan.

Believing in correspondences between human and natural realms, Whitman equates the hopes, dreams, and risks of a poetic venture, an extended voyage of discovery to exotic, largely unknown locales, and the heroic adventure by which the soul seeks to know itself and achieve oneness with God. Whitman sees the unity of all time and place and the perfectibility of all. The preface to the 1855 edition of Leaves of Grass makes clear his belief that poetry should move from the physical realm to spiritual implications. “Crossing Brooklyn Ferry” (1856, 1881) and “Passage to India” (1871, 1881) do just that. In the former poem, the sights and sounds of the short ferry ride from Manhattan to Brooklyn give way to a vision of the perfection of all times and places and to acceptance of the cosmos and human nature. In “Passage to India,” temporal, physical, geographical journeys and links are portrayed as analogous to the human soul in search of itself and God.

In sea voyages, literary ventures, life itself, and the spiritual journey of the soul, Whitman sees and affirms the ebb and flow of cosmic forces. The rising tides of youth, aspiration, and success are balanced against the ebbing tides of age, literary and philosophical uncertainty, life reversals, calamities at sea, and death. The “Sea Drift” section of Leaves of Grass includes such sea poems as “Out of the Cradle Endlessly Rocking” (1859,188 I), “As I Ebb’d with the Ocean of Life” (1860, 18811, “To the Man-of-war Bird” (1876, 1881), and others. It embeds this vision of antithetical cosmic forces in marine settings and situations. These poems begin with expressions of mutability, loss, destruction, and death in all realms. Flotsam and jetsam, debris, and sea drift mark the scene and testify to the enormity of destructive forces. Ultimately, however, these poems surmount the apparent victory of death and destruction, reasserting the life-supporting principle of complementary opposition. Fuller, richer life in all its aspects arises out of loss and death. The lifeless sea drift and debris provide the seeds for “man elate over death.”

Whitman’s poetry rebels against nineteenth-century poetic conventions and limitations. In rejecting then-current poetic forms, it relies on rhythmic repetition, not syllable counting, for poetic regularity. The repetitive, yet ever-changing, rhythm of ocean waves and tides provides both analogy to, and inspiration for, Whitman’s poetic revolution. Such rhythm has induced at least three notable composers to set texts of Whitman to music. Howard Hanson wrote a short choral work about a grand voyage on the high seas as an explicit metaphor for life’s voyage to death and, presumably, to eternity in his Symphony No. 7, subtitled “Sea Symphony” (1974), which uses three fragments from Leaves of Grass: “Lo the Sea! The Unbounded Sea,” “The Untold Want, by Life and Land Ne’er Granted,” and “Joy, Shipmate, Joy!” Ralph Vaughan Williams’ much longer A Sea Symphony (1907) uses such Whitman poems as “A Song for All Seas, All Ships” and “On the Beach at Night Alone.” Composer John Adams has set “The Wound-Dresser” for baritone voice and orchestra (1989, 1992).

See in particular, among others, within Leaves of Grass:

Whitman, Walt. The Sea Is A Continual Miracle: Sea Poems and Other Writings by Walt Whitman. Edited with an introduction by Jeffrey Yang. Univ. Press of New England, 2017.